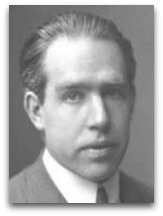 Chemistry
In chemistry, in 1913 Bohr developed what has come to be known as the Bohr model of the atom, which depicts the atom with a small positively charged nucleus, surrounded by circular orbits of negatively charged electrons, which jump up in orbital position by the absorption of a quantum of electromagnetic energy (light or photon) and jump down in orbital position with the release of a quantum amount of electromagnetic energy. [4] This seems to be from where the notion of the energy level originated.

Complementarity principle | Human experiences
In 1958, Bohr, in his Atomic Physics and Human Knowledge, according to Aharon Katchalsky (1970), attempted to show that his principle of complementarity, of atomic physics, could serve as a basis for international complementary relations between contradictory cultures. [9]

Bohr, according to Bruce Lindsay (1983), applied his complementarity principle of quantum mechanics to domain of human experiences, the complementary aspects of love and justice, specifically. [8]

In regards to the repercussion of quantum mechanics, namely his complementarity principle (1927), applied to animate nature, Bohr reasoned that the living state would be irreducible to that of the non-living state; as explained by Howard Pattee: [2]

"Bohr (1958) often speculated that the complementarity principle would prevent simultaneous physical and biological description, and that the living state should be regarded as irreducible both in definition as well as observation."

In his 1961 essay "Physical Models and Living Organisms," Bohr stated the following: [5]

"Thus, there appears to be no reason to expect any inherent limitation of the application of elementary physical and chemical concepts to the analysis of biological phenomena. Yet, the characteristic properties of living organisms, which have resulted from the whole history of organic evolution, reveal potentialities of immensely complicated material systems, which have no parallel in the comparatively simple phenomena studied under reproducible experimental conditions."

Life | Will | Purpose
Bohr, in his 1930s lectures on physics and biology, gives a puerile view in an attempt to find a solution between vitalism and mechanism, in respect to both will, life, and purpose; the following are examples:

“The very existence of ‘life’ must in biology be considered as an elementary fact, just as in atomic physics the existence of the quantum of action has to be taken as a basic fact that cannot be derived from ordinary mechanical physics.”

“The freedom of the will is considered as a feature of conscious life which corresponds to functions of the organism that not only evade a causal mechanical description but resist even a physical analysis carried to the extent required for an ambiguous application of the statistical laws of atomic mechanics.”

“The existence of life itself should be considered, both in regards its definition and observation, as a basic postulate of biology, not susceptible of further analysis, in the same way as the existence of the quantum of action, together with the ultimate atomicity of matter, forms the elementary basis of atomic physics.”

“The lesson with respect to the role which the tools of observation play in defining the elementary physical concepts gives a due to logical application of notions like ‘purposiveness’ foreign to physics, but lending themselves so readily to the description of organic phenomena. Indeed, on this background it is evident that the attitudes termed mechanistic and finalistic do not present contradictory views on biological problems, but rather stress the mutually exclusive character of observational conditions equally indispensable in our search for an ever richer description of life.”

He concludes, in a basic copout sense, that “such a view is equally removed from the extreme doctrines of mechanism and vitalism” and “it rejects as irrational all such attempts at introducing some kind of special biological laws inconsistent with well-established physical and chemical regularities”. Bohr, of note, states that he gives these lectures with “temerity” mixed with “great hesitation”.

Students
One of Bohr’s most-noted students was Werner Heisenberg who commented in 1973 retrospect: [3]

“When I entered Neils Bohr’s institute in Copenhagen in 1924, the first thing Bohr demanded was that I should read the book of Gibbs on thermodynamics. And he added that Gibbs had been the only physicist who really understood statistical thermodynamics.”

English physicist C.G. Darwin also spent a term working with Bohr in Copenhagen, during the time when the uncertainty principle and the ‘spinning electron’ were discovered. Russian physicist Lev Landau was also said to have been a protégé of Bohr. Linus Pauling also studied under Bohr.

Human physics
In human physics, the philosophy of Bohr was used in the development of Czechoslovakian physicist Reinhold Furth’s 1950s notions that statistical mechanics and crystallography should be employed by sociology students. [4]

“How wonderful that we have met with paradox. Now we have some hope of making progress.”