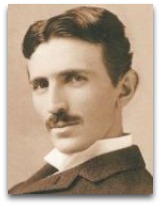 In existographies, Nikola Tesla (1856-1943) (IQ:195|#18) [RGM:7|1,500+] (RE:87) (CR:148) was a Austrian-born American electrical engineer, philosopher, and polyintellect noted for his 1988 invention of the AC electromagnetic motor; for his 1900 article “The Problem of Increasing Human Energy”, wherein he outlines the three types of kinetic human energy, discussing ways to increase, decrease, and to measure this energy; and for his 1915 article “How Cosmic Forces Shape Our Destines” wherein he outlines a proto defunct theory of life formulation that there is no thing endowed with life. [1]

Defunct life theory
In 1915, Tesla published his New York American article “How Cosmic Forces Shape Our Destines”, which extols a mixture of the defunct theory of life and the panbioism perspective, i.e. the everything is alive point of view. Tesla’s views, in this area, to note, are akin, in some sense, to those of German polymath Johann Goethe, being that Tesla read the philosophy of Goethe (see: Goethean philosophy) to the exclusion of all other philosophies. The following is the famous opening section from Tesla's article: [6]

“Every living being is an engine geared to the wheelwork of the universe. Though seemingly affected only by its immediate surrounding, the sphere of external influence extends to infinite distance. There is no constellation or nebula, no sun or planet, in all the depths of limitless space, no passing wanderer of the starry heavens, that does not exercise some control over its destiny—not in the vague and delusive sense of astrology, but in the rigid and positive meaning of physical science.

More than this can be said. There is no thing endowed with life—from man, who is enslaving the elements, to the humblest creature—in all this world that does not sway it in turn. Whenever action is born from force, though it be infinitesimal, the cosmic balance is upset and universal motion result.

Herbert Spencer has interpreted life as a continuous adjustment to the environment, a definition of this inconceivably complex manifestation quite in accord with advanced scientific thought, but, perhaps, not broad enough to express our present views. With each step forward in the investigation of its laws and mysteries our conceptions of nature and its phases have been gaining in depth and breadth.

In the early stages of intellectual development man was conscious of but a small part of the macrocosm. He knew nothing of the wonders of the microscopic world, of the molecules composing it, of the atoms making up the molecules and of the dwindlingly small world of electrons within the atoms. To him life was synonymous with voluntary motion and action. A plant did not suggest to him what it does to us—that it lives and feels, fights for its existence, that it suffers and enjoys. Not only have we found this to be true, but we have ascertained that even matter called inorganic, believed to be dead, responds to irritants and gives unmistakable evidence of the presence of a living principle within.

Thus, everything that exists, organic or inorganic, animated or inert, is susceptible to stimulus from the outside. There is no gap between, no break of continuity, no special and distinguishing vital agent. The same law governs all matter, all the universe is alive. The momentous question of Spencer, "What is it that causes inorganic matter to run into organic forms!" has been answered. It is the sun's heat and light. Wherever they are there is life. Only in the boundless wastes of interstellar space, in the eternal darkness and cold, is animation suspended, and, possibly, at the temperature of absolute zero all matter may die.”


The first two paragraphs, of this opening article section, corroborate with the now confirmed and accepted 2009 defunct theory of life, i.e. that life is something that does not exist. Very deep insight indeed. In the last paragraph we see Tesla: conclude that the unbridgeable gap model is bunk (correct), that vitalism is bunk (correct), that the same law (thermodynamics) governs all matter (correct), discuss the heat death theory (seems cogent), and attempt to give his solution to the Spencer-version of the great problem of natural philosophy (close). In the last of these, however, his mention that "all the universe is alive" (incorrect) is one step away from the rigid physical science defunct view of life, namely that correctly "nothing in the universe is alive" (correct). When one first delves into the matter, such as via descent down to smaller scales, e.g. as viewed on the molecular evolution table or evolution timeline, the first possibility that comes to mind, knowing that atoms and nucleons are teeming with movement and activity, is to conclude that "all is alive" in some sense of the matter. This view, however, does not hold water in the long run after which one concludes that the "all is alive" possibility is an anthropomorphism and that correctly what is needed is a deanthropomorphism.

Spirit | Soul
In 1935, Tesla published his “A Machine to End War”, where he stated the following in regards to the metaphysical terms soul and spirit: [7]

“To me, the universe is simply a great machine which never came into being and never will end. The human being is no exception to the natural order. Man, like the universe, is a machine. Nothing enters our minds or determines our actions which is not directly or indirectly a response to stimuli beating upon our sense organs from without. Owing to the similarity of our construction and the sameness of our environment, we respond in like manner to similar stimuli, and from the concordance of our reactions, understanding is born. In the course of ages, mechanisms of infinite complexity are developed, but what we call 'soul' or 'spirit,' is nothing more than the sum of the functionings of the body. When this functioning ceases, the 'soul' or the 'spirit' ceases likewise.”

Automaton theory
In 1900, Tesla published his “The Problem of Increasing Human Energy”, wherein he stated the following belief state or view on what a human is:

“I am an automaton endowed with power of movement, which merely responds to external stimuli beating upon my sense organs.”

Tesla opens with a crude diagrammatic model of “human energy”, shown adjacent, discussing rather cogently the impelling and retarding forces to human movement. To explain this diagram, Tesla states:

“Let M represent the mass of man. This mass is impelled in one direction by a force f, which is resisted by another partly frictional and partly negative force R, acting in a direction exactly opposite, and retarding the movement of the mass. Such an antagonistic force is present in every movement and must be taken into consideration. The difference between these two forces is the effective force which imparts a velocity V to the mass M in the direction of the arrow on the line representing the force f. In accordance with the preceding, the human energy will then be given by the product:

where M is the total mass of man in the ordinary interpretation of the term "mass," and V is a certain hypothetical velocity, which, in the present state of science, we are unable exactly to define and determine. To increase the human energy is, therefore, equivalent to increasing this product, and there are, as will readily be seen, only three ways possible to attain this result, which are illustrated in the above diagram.

The first way shown in the top figure, is to increase the mass (as indicated by the dotted circle), leaving the two opposing forces the same.

The second way is to reduce the retarding force R to a smaller value r, leaving the mass and the impelling force the same, as diagrammatically shown in the middle figure.

The third way, which is illustrated in the last figure, is to increase the impelling force f to a higher value F, while the mass and the retarding force R remain unaltered. Evidently fixed limits exist as regards increase of mass and reduction of retarding force, but the impelling force can be increased indefinitely. Each of these three possible solutions presents a different aspect of the main problem of increasing human energy, which is thus divided into three distinct problems.”

Curiously, a similar depiction of the various forces acting to move the human or rather human molecule, in modern parlance, were presented in American electrochemical engineer Libb Thims' 2009 chapter "Thermodynamics Philosophy of Evolution". [2]

Here, to note, in Tesla's derivation of a formula for human energy, seems to be attributing the entirety of human energy to kinetic motion (or vis viva), whereas in the modern human chemical thermodynamics sense of the matter, the totality of human energy, according to the standard model, is divided into three main variants of energy:

Tesla, however, would not likely have been aware of this logic, as it was not until the 1923 work of American physical chemist Gilbert Lewis that this view came into the body of common knowledge.

This statement finds acceptance in the modern view that from a chemical point of view, a man defined as a molecule, i.e. "human molecule", there is no such thing as “life”, but only, instead, different degrees of movement, animation, or reaction, in contrast to inertness, or dissolution.

Goethe
Tesla was said to have been an adherent of the philosophy of German polymath Johann Goethe. Tesla owned a thorough collection of Goethe’s scientific texts and read these to the exclusion of all other philosophies.

The idea for a self-starting AC electric motor came to Tesla one evening as he was reciting a poem of Goethe, specifically a passage from Faust, a book which he had memorized in entirety (among other books), and watching a sunset, at which point he imagined a magnetic field rapidly rotating inside a circle of electo-magnets. [4]

Voltaire
Tesla, somewhere along the lines, also engaged into a quest to master the works of Voltaire (IQ=195). The following are Tesla's reflections on this task:

“I had a veritable mania for finishing whatever I began, which often got me into difficulties. On one occasion I started to read the works of Voltaire when I learned, to my dismay, that there were close on one hundred large volumes in small print which that monster had written while drinking seventy-two cups of black coffee per diem.﻿ It had to be done, but when I laid aside the last book I was very glad, and said, ‘Never more!’”

Other
In the literature something called the “Tesla principle” was said to be a type of reversible process invented by Tesla; this, however, may not be related to thermodynamics and needs fact checking.

“Life is and will ever remain an equation incapable of solution, but it contains certain known factors.”

“It seems that I have always been ahead of my time.”

“Though free to think and act, we are held together, like the stars in the firmament, with ties inseparable.”