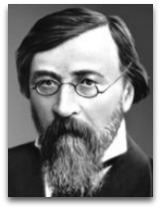 In existographies, Nikolay Chernyshevsky (1828-1889) (CR:3), or Nicholas, was a Russian materialist philosopher, noted for []

Overview
In 1860, Chernyshevsky, in his essay “The Anthropological Principle in Philosophy”, argued that, based on the recent chemical vitalism theory (see: vitalism) downfall—i.e. that organic substances, such as urea or acetic acid, could be made outside of organic bodies—and the utilitarianism views of John Mill and the humanistic materialism views of Ludwig Feuerbach, he outlined a social materialism philosophy (see: materialism): [1] He called his model the “anthropological principle”. [2] On this principle, Chernyshevsky did away with all dualisms: mind-body (Cartesian dualism), mind-brain, subject-object, etc., and attempted to solve the great question of good and evil and of human actions based thereon, based on his unique version of utility:

“Good is the superlative of utility, a very useful utility.”

Evil, therefore, consists in what is not useful, and theoretical miscalculations in determining utility cause the extreme evil that man perpetual on each other. [3]

Russian revolution
Chernyshevsky put this philosophy into his 1863 What Is to Be Done?, which was read by Lenin (five times in one summer) among others, and is said to have “supplied the motional dynamic that eventually went into make the Russian Revolution.” [4]

Quotes | On
The following are quotes on Chernyshevsky:

“You say, science itself will teach man that he does not really have either caprice or will of his own and that he has never had it, and that he himself is something like a piano key or an organ stop, and that, moreover, laws of nature exist in this world, so that everything he does is not done by his ‘will’ at all, but is done by itself, according to the laws of nature. Consequently, we have only to discover these laws of nature, and man will no longer be responsible for his actions and life will become exceedingly easy for him.”

“What we call ‘will’ is not free, but only a link in the chain of causes giving rise to human acts. Human ‘will’, therefore, is subject to material natural law. Chernyshevsky did not state it chemically; but, because man was a ‘chemical combination’, he believed that it now was possible to explain all will and behavior on the basis of a rational concept.

Quotes | By
The following are quotes by Chernyshevsky:

“The human organism is but a complex ‘chemical combination’ that goes through an extremely complex chemical process that we call life; human ‘acts’, in their theoretical formula, all come under the same law; the strongest passion gains the upper hand over those that are less strong, which are sacrificed to the former.”