Noah's ark, in short, is the Hebrew (Is-Ra-El-ites) turned Christian origin of animals and humans, following a great flood, a monotheistic version retelling of the Heliopolis creation myth story of Nu’s solar barque, according to which, following a primordial flood (technically the annual Nile River flood), burst forth from the Nun (or Nu), i.e. a rising land mound (pyramid), and carried the sun (Ra) through the sky in its daily journey, from whose power of which all humans were procreated.

Christian | Islam version
Typically modern Christian and Islam children, throughout the world, are taught that the originally humans had sinned, or dishonored the gods in some way, but that among these sinful humans, one person, named Noah, was righteous. God told this righteous person to build an ark, i.e. large boat, and to put two of ever animal on it, along with is family, so to survived the great flood that god was planning to inflict on the world. Noah followed these instructions, and from this boat is from where all humans and animals originated.

Hindu version
The Hindu version, taught to children, is about the same, only Noah is known as Ma-Nu and the story involves a talking fish.

Etymologically, the story of Noahs' ark, derives from the story of the god Nun (Noah), in the form of a mountain (pyramid), arising out of the a great primordial flood, which covered the world, from which the the sun burst forth, conceptualized as the god Ra, and was thereafter carried through the arc of the sky on a solar barque. The following, in short, shows the Egyptology to Hinduism and Christianity reformulation of annual Nile river flood cycle and perceptually seen islands (pyramids) arising out of the receding flood at the end of the 150-day flood cycle, anthropomorphized into the stories of Noah’s ark (or Nuh's ark) and Manu’s, respectively: (Ѻ) (Ѻ) 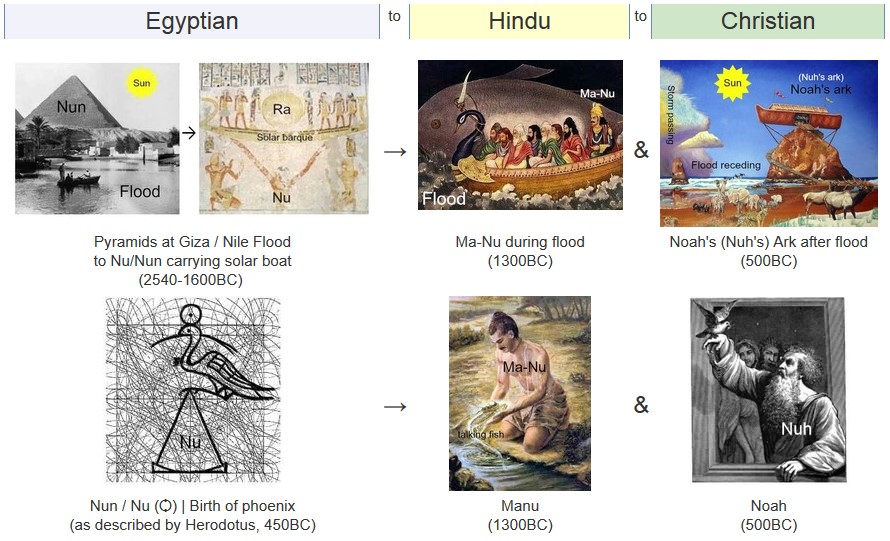 Creationism
American civil engineer Henry Morris, who believed in the existence of Noah’s ark (Ѻ); his 1961 The Genesis Flood, co-written with John Whitcomb, argues that geological theories do not truly depend on scientific data but are rather a "moral and emotional decision," in which evolutionists seek "intellectual justification for escape from personal responsibility to his Creator and escape from the ‘way of the Cross’ as the necessary and sufficient means of his personal redemption"; was eventually kicked out of Virginia Tech, in 1970, because his creationism writings were becoming "too controversial."

In the 1990s, American amateur scientist and Christian apologeticist Kent Hovind became known as "Dr. Dino" because he said that dinosaurs fit on Noah's ark, because Noah only took the Dinosaur eggs with him.

Ark Encounter
In 2010, the $27 million dollar Creation Museum, in Kentucky, run by Ken Ham, announced its plans to build a $50 million dollar replica (Ѻ) of the Ark; but by 2015, they had raised $19 million dollars (Ѻ); a draft image of the proposed ark is shown adjacent.

“Because, even although it might rise to the height mentioned, the ark could not have contained, according to known physical laws, all the living things of the earth, together with their food, for so long a time; considering that lions, tigers, panthers, leopards, ounces, rhinoceroses, bears, wolves, hyenas, eagles, hawks, kites, vultures, falcons, and all carnivorous animals, which feed on flesh alone, would have died of hunger, even after having devoured all the other species.”

“The Noah story is nothing less than a very detailed and reasonably accurate version of the Heliopolian creation myth.”