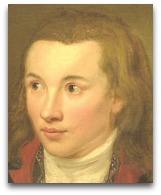 Education
The following is a snippet of the education of Novalis: [3]

“Although so conversant with critical philosophy, still von Hardenberg loved intercourse with men who cultivated his aesthetic and poetical genius. The spirit of the times just then brought ideas of freedom and equality, man's rights, and the principles of government under discussion. He also studied law, especially at Leipzig and Wittenberg; and attained great proficiency in both chemistry and mathematics.”

In 1789, Novalis, aged 17, had become greatly influenced by Plotinus:

“I do not know if I have already spoken to you of my beloved Plotinus? Through Tiedemann, I have been initiated into this philosopher, born expressly for me, and I have been almost frightened by his resemblance to Kant and Fichte. He pleases me more than either of them.”

Other
In 1910, Vyacheslav Ivanov began to do work on Goethe's human chemical theory, that supposedly has relation to Novalis. [1]

Quotes | On
The following are quotes on Novalis:

“When one says of any man ‘He is a genius’, the accepted meaning is, that he has the peculiar quality of mind which not only enables him to acquire science or the arts with unusual facility, but has power to produce his knowledge in an original way. If the mind takes a strong bent in one direction, either towards art or science, we say, ‘He has a poetical or mathematical genius’. But we mean a very different thing when we say, ‘He is a genius’. We express thereby that nature has so endowed the man that in the particular art or science to which he is devoted he is not only technically perfect, but original, and has an inherent power and adaptability which enables him not only to master difficulties with ease, but to go to the very bottom of his subject, retain clearly all he has acquired, and exercise judgment and penetration in combining the results of his researches. He must have such well-balanced powers of mind that his perseverance in work is equaled by his dexterity in practice, joined to love and delight in his occupation. These remarks occurred to me while watching the development of Fredrich von Hardenberg's richly gifted mind. Genius is often accused of superficiality and caprice, of preferring pleasurable to graver studies, of living in theories and abhorring practical matters. But this was not the case with Hardenberg. He was determined to study everything thoroughly and deeply, and to investigate every subject of human knowledge. Joined to this, he gave diligent heed to practical life, never shirking any detail, however irksome. In addition, his heart was open to impressions of all that nature, friendship, or love can offer; and while he laboured to develop his mind, he never ignored the claims on his affections, and gauged clearly the hearts and powers of all around him.”

“Fuller had read German books, and, for the three years before I knew her, almost exclusively: Lessing, Schiller, Richter, Tieck, Novalis, and, above all GOETHE. It was very obvious, at the first intercourse with her that the last writer—food or poison—the most powerful of all mental reagents—the pivotal mind in modern literature—for all before him are ancients, and all who have read him are modern—that this mind had been her teacher, and, of course, that place was filled, nor was there room for any other. She had that symptom which appears to all the students of Goethe.”

“There are men of great genius who have shown no special talent in any marked degree; for instance, men like Novalis or Jean Paul.”

Quotes | By
The following are quotes by Novalis:

“The simplification and combination of science, and the transformation of all sciences into one, is an exercise for philosophy, which the love of science demands.”

“Light in action; light is like life—a force; light makes fire—it is the genius of the fire.”

“Thought is certainly electricity; the earthly spirit and its spiritual atmosphere are acted on by a heavenly supernatural spirit.”

“Body and soul affect each other electrically.”

“The world must be romanticized. In this way the originary meaning may be found again.”

“Goethe was the first physicist of his time and epoch-making in the history of physics.”