In Egyptian mythology, Obelisk refers to one of many architectural representations, originally made in Egypt, of the missing phallus of Osiris, as told historically in the ancient passion of Osiris play.

Overview
In c.3100BC, in the Heliopolis creation myth, the tip of the pyramid, named the benben stone, out of which the bennu bird flies, carrying the sun god Ra, was considered to be the petrified semen of Atum; a surmised overview of this is illustrated (Ѻ) as follows: 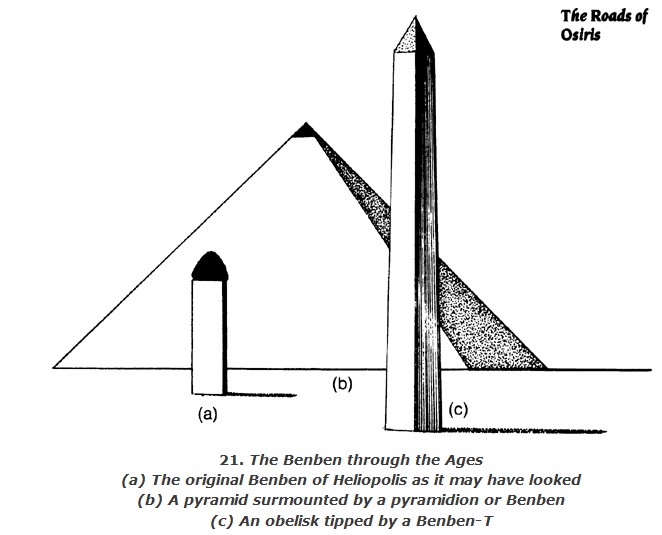 In c.2500BC, in the same general myth, the god Geb, symbolic of the earth, was oft-depicted as trying to obtain coitus with the sky goddess Nut, as shown below: 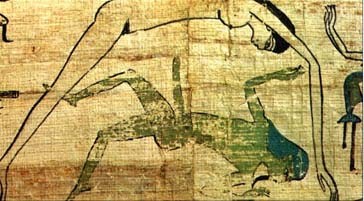 In c.2400BC, in the passion of Osiris, the so-called golden phallus of Osiris was said to have been lost in the Nile river, presumably eaten by a fish, but then, when Osiris is re-combined into the form of a mummy, a golden phallus is made to be his new sexual organ; this is shown below:

This, generally speaking, is considered to have been the origin of the obelisk, although certainty of this connection is inexact.

“This process was intensified in the third intermediate period [1069-945BC], and it was at this time that the first representations of Osiris with the obelisk appear on painted coffins. Let us now examine the contexts in which Osiris or Isis are shown together with the obelisk. In the third intermediate period, a new representation of Osiris was created which can be called ‘Osiris standing in the tree’ [see: Christmas tree]. The motif of Osiris in the tree is often accompanied, on both sides, by an obelisk and some deities. In this case, Osiris is identified with the periodic renewal of vegetation, and this chthonic type of regeneration is synchronized with the cosmic type. Among the bronze statuettes of the first millennium, there is a relatively rare type showing a divinity sitting or standing in front of an obelisk. I already mentioned a sitting variant of Osiris with a hollow obelisk containing a model phallus. Other variants are devoted to solar deities such as Re or Atum; they need not be discussed here.”

“Another telling goes like this, Nimrod/Osiris was killed by an enemy and his body was cut into pieces and sent out into his kingdom. Semiramis gathered all the parts and seemingly put them back together, except for his reproductive organ, which she could not find. She proclaimed that Nimrod could not come back to life without that missing part, and she had one made and set up in Babylon. "Semiramis quarried out a stone from the mountains of Armenia which was one hundred and thirty feet long and twenty five feet wide and thick... she brought it down the stream to Babylonia...." "The ancient Greek historian, Diodorus, reports that Queen Semiramis erected a 130-foot obelisk in Babylon and it was associated with sun worship and represented the phallus of the sun god Baal/Nimrod. Some Masonic researchers say that the word `obelisk' literally means 'Baal's shaft' or 'Baal's organ of reproduction'." is . This particular obelisk is not found today, it is known as the Lost Obelisk of Babylonia. There are others. That missing part would later be represented by thousands of obelisks around the planet. The obelisk is still recognized as Osiris/Nimrod's phallus, his sex organ of reproduction. One wonders why there is a huge obelisk in Washington, D.C., and one at the Vatican. There are obelisks in just about every important city and in every nation on earth. Why?”

Further reading
● King, James. (1893). Cleopatra's Needle: A History of the London Obelisk, with an Exposition of the Hieroglyphics (txt). Publisher.