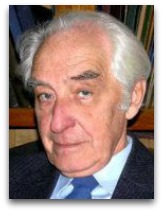 In existographies, Octavian S. Ksenzhek (c.1945-) (TR:11) is a Russian bio-electrochemist noted, in economic thermodynamics, for his 2007 Money: Virtual Energy: Economy through the Prism of Thermodynamics, wherein he models economics systems thermodynamically and people as molecules.

Overview
In 2007, Ksenzhek, in his Money: Virtual Energy: Economy through the Prism of Thermodynamics, argued that economy, modeled as an irreversible thermodynamic system, performs work necessary for functioning of society, at the expense of the dissipation of energy. The following is Ksenzhek's two cultures dissection of the economics and thermodynamics divide issue:

“The grandiose building of modern human knowledge, growing before our eyes with impressive acceleration, shows now some features that resemble the story of the construction of the Babylon Tower. As time goes on, the specialization of science becomes deeper and deeper, so that the ‘builders’ of its different domains lose the ability to understand each other. It is happening because the division of science into different branches is artificial and reflects its preceding path of development rather than the natural interlinks or similarities between the phenomena that they deal with. Economics and thermodynamics represent just one example of this kind. They are located far enough from each other on the tree of science that their branches do not intersect. Students of both disciplines are mostly ignorant of ideas and methods of the other side. Specialists in both sciences publish their works in different journals and do not assemble together at common conferences.”

Building on the work of Frederick Soddy, namely his 1926 book Virtual Wealth and Debt, with passing mention of Herbert Spencer, Vilfredo Pareto, and Ilya Prigogine, Ksenzhek argues that "money" plays a fundamental role of virtual energy specific for economic processes and makes possible the mutual coupling of energy flows distinct in their nature. [2] Although Ksenzhek supports the application of thermodynamics in economics, he objects to its use in political thermodynamics.

Human molecules
In relation to the concept of the human molecule, Ksenzhek correctly states that: "the economy of mankind is a very large and extremely complicated system: people are the 'molecules' of which it consists", and "various associations of people constitute its structural components." [1]

Working medium
In terminological analogy to French physicist Sadi Carnot's 1823 "working substance" and German physicist Rudolf Clausius' 1850 "working body", Ksenzhek correctly outlines the view of what he calls a “working medium”. Specifically, he gives a very basic neurochemical human thermodynamic view in which endorphins, i.e. the body’s natural pain killer and mental high chemical, in low concentrations exert a strong influence on the processes of the nervous system, particularly in the pleasure center. Thus, he concludes that endorphins play a key role in the hidden processes of basic human motivations and that in the economic system, humans act as “active agents” coupling technology and “virtual energy flows”. [1]

Subsequently, according to Ksenzhek, the modern economy exploits the various endorphin channels with every-increasing intensity, via advertising, commercials, the image in the mind of becoming sexier with a certain product, e.g. a new car, or new technology. In this manner, “a whole arsenal of various means is set into action to inspire people to incessantly wish for something. Such a state of people is necessary for their efficient functioning as the “working medium” of the economic cycle. In order to keep people excited, powerful advertising is used. As a rule, it appeals to the subconscious rather than reason." [1]

Education
Ksenzhek has a DrSci and PhD in something. Ksenzhek in 2007 was head of the Laboratory of Bioelectrochemistry at the Ukrainian State University for Chemical Technology, Dniepropetrovsky. He is the author of three books, including the 1998 Plant Energetics, on the thermodynamics of energy processes in plants, their interconnection and arrangement, and the estimation of intrinsic energy needs of the plant connected with performing various physiological functions. [3]