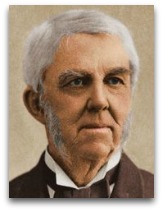 “If one were told that many centuries ago a celestial ray shone into the body of a sleeping woman [see: virgin birth], as it seemed to her in her dream; that thereupon the advent of a wondrous child was predicted by the soothsayers; that angels appeared at this child's birth; that merchants came from afar, bearing gifts to him; that an ancient saint recognized the babe as divine, and fell at his feet and worshiped him; that in his eighth year the child confounded his teachers with the amount of his knowledge, still showing them due reverence; that he grew up full of compassionate tenderness to all that lived and suffered; that to help his fellow-creatures he sacrificed every worldly prospect and enjoyment; that he went through the ordeal of a terrible temptation, in which all the powers of evil were let loose upon him, and came out a conqueror over them all; that he preached holiness and practiced charity; that he gathered disciples and sent out apostles, who spread his doctrine over many lands and peoples; that this ‘helper of the world’ could claim a more than earthly lineage and a life that dated from long before Abraham was — of whom would he think this wonderful tale was told? Would he not say at once that this must be another version of the story of one who came upon our earth in a Syrian village during the reign of Augustus Caesar, and died by violence during the reign of Tiberius? What would he say if he were told that the narrative was between five and six centuries older than that of the founder of Christianity [Jesus]? Such is the story of this poem. Such is the date assigned to the personage [Buddha] of whom it is told.”

“The mind of a bigot to the pupil of the eye; the more light you pour on it, the more it contracts.”