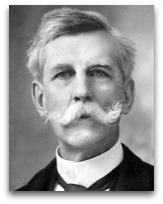 “If this universe is one universe, if it is so far thinkable that you can pass in reason from one part of it to another, it does not matter very much what that fact is. For every fact leads to every other by the path of the air. Only men do not yet see how, always. And your business as thinkers is to make plainer the way from some thing to the whole of things; to show the rational connection between your fact and the frame of the universe. If your subject is law, the roads are plain to anthropology, the science of man, to political economy, the theory of legislation, ethics, and thus by several paths to your final view of life. It would be equally true of any subject. The only difference is in the ease of seeing the way. To be master of any branch of knowledge, you must master those which lie next to it; and thus, to know anything — you must know all.”

References
1. (a) Holmes, Oliver. (1886). “The Profession of the Law”, Conclusion of a lecture Delivered to Undergraduates of Harvard University, Feb 17.
(b) Holmes, Oliver. (1943). The Mind and Faith of Justice Holmes: His Speeches, Essays, Letters, and Judicial Opinions (pgs. 32-33). Transaction Publishers.