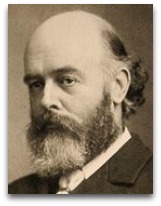 In existographies, Oliver Lodge (1851-1940) (GPE:111) (CR:11) was an English physicist, electrical engineer, and philosopher, noted for his involvement in the 1902-1904 “what is entropy debate”, for at some point (Ѻ) having performed laboratory experiments, with William Crookes, in attempts to provide evidence of survival of consciousness after physical death (reaction end), a belief deriving from his theory that some type of electromagnetic field like ether existed in which the spirit world was embedded, thus satisfying his spiritual Christian belief system.

Telegraphy
In c.1893, Lodge realized the possibility of using Hertzian waves for the transmission and reception of telegraphic messages.

In 1894, Lodge described a device which consisted of a receiver tuned to a proper resonance to collect waves, a detector, i.e. a relay to amplify the signals and a printer for recording dots and dashes. [4]

Length contraction
Lodge is credited by Lorentz, supposedly, with the first published description of the length contraction hypothesis, in 1893; though in fact Lodge's friend George Francis FitzGerald had first suggested the idea in print in 1889.

Overview
In 1905, Lodge, in his Life and Matter: a Criticism of Professor Haeckel’s Riddle of the Universe, attempted to do battle with Ernst Haeckel and his Goethe-based monism; one semi-cited section of which is as follows:

“To every force there is an equal opposite force or reaction, and a reaction may be against a live body, but it is never suspected of being against the abstraction, life or mind—that would indeed be enlarging the scope of mechanics!—the reaction is always against some other body. All stresses, as a matter of fact, occur in the ether; and they all have a material terminus at each end (or, in exceptional cases, a wave-front or some other recondite ethereal equivalent); that is to say, something possessing inertia; but the timed or opportune existence of a particular stress may be the result of organization and control. Mechanical operations can be thus dominated by intelligence and purpose. When a stone is rolling over a cliff, it is all the same to "energy" whether it fall on point A or point B of the beach. But at A it shall merely dent the sand, whereas at B it shall strike a detonator and explode a mine. Scribbling on a piece of paper results in a certain distribution of fluid and production of a modicum of heat: so far as energy is concerned it is the same whether we sign Andrew Carnegie or Alexander Coppersmith, yet the one effort may land us in twelve months' imprisonment or may build a library, according to circumstances, while the other achieves no result at all. John Mill used to say that our sole power over nature was to move things; but, strictly speaking, we cannot do even that: we can only arrange that things shall move each other, and can determine by suitably preconceived plans the kind and direction of the motion that shall ensue at a given time and place, provided always that we include in this category of "things " our undoubtedly material bodies, muscles, and nerves.

But here is just the puzzle: at what point does will or determination enter into the scheme? Contemplate a brain-cell, whence originates a certain nerve-process whereby energy is liberated with some resultant effect; what pulled the detent in that cell which started the impulse? No doubt some chemical process: combination or dissociation, something atomic, occurred; but what made it occur just then and in that way?

I answer, Not anything that we as yet understand, but apparently the same sort of prearrangement that determined whether the stone from the cliff should fall on point A or point B; the same sort of process that guided the pen to make legible and effective writing instead of illegible and ineffective scrawls; the same kind of control that determines when and where a trigger shall be pulled so as to secure the anticipated slaughter of a bird. So far as energy is concerned, the explosion and the trigger-pulling are the same identical operations, whether the aim be exact or random. It is intelligence which directs; it is physical energy which is directed and controlled and produces the result in time and space.”

American political entropy theorist Randall Schweller (2014), citing the above quote, attempted to spin it off in the following manner: [3]

“Lodge, here, explained why mechanical operations and physical energy must be guided by purposive intelligence to perform useful work. It is of no consequence to the ‘energy’, he points out, whether the stone rolling over a cliff falls on point A or point B of a beach. If purposive intelligence to direct available energy is required for useful work, then it follows that entropy increases in the absence of such guidance. This is the general intuition that things tend to go to pot unless someone intervenes; that willful intelligence circumvents the natural tendency for disorder to increase in the world.”

This, of course, is anthropomorphically imbecilic.

In 1930, Lodge, in his Beyond Physics, penned the following emergent property argument, which he employed as follows: [2]

“It is proved that neither an atom of hydrogen nor an atom of oxygen has any of the properties of water. The separate atoms acquire those properties in combination. Hence a molecule has properties denied to an atom, and so also an organized assemblage of a large number of molecules; and if the molecular compounds are sufficiently complicated and sufficiently numerous so as to be organized into a portion of protoplasm, then further properties makes it appearance.”

Here, Lodge seems to be alluding to the premise that life (and or spirit) is an emergent property found in or past the protoplasm level of molecular complexity.

“That is where I part company with Professor James Ward in the second volume of Naturalism and Agnosticism; with whom, nevertheless, on many broad issues I find myself in fair agreement. Those who find a real antinomy between ‘mechanism and morals’ must either throw overboard the possibility of interference or guidance or willed action altogether, which is one alternative, or must assume that the laws of physics are only approximate and untrustworthy, which is the other alternative—the alternative apparently favoured by Professor James Ward. I wish to argue that neither of these alternatives is necessary, and that there is a third or middle course of proverbial safety: all that is necessary is to realise and admit that the laws of physical science are incomplete, when regarded as a formulation and philosophical summary of the universe in general. No Laplacian calculator can be supplied with all the data.”