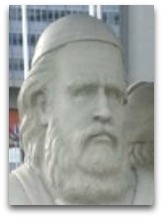 Education
Khayyam taught the philosophy of Avicenna for decades in Nishapur, where he was born and buried.

“Khayyam is an atheist, but knows how to interpret in orthodox style the most difficult passages of the Koran; for every educated man is a theologian and faith is not a requisite.”

“It's not a coincidence that Omar Khayyam, rebuking and ridiculing the stone-faced Iranian mullahs of his time, pointed to the value of the grape as a mockery of their joyless and sterile regime. Visiting today's Iran, I was delighted to find that citizens made a point of defying the clerical ban on booze, keeping it in their homes for visitors even if they didn't particularly take to it themselves, and bootlegging it with great brio and ingenuity. These small revolutions affirm the human.”

“The Koran! Well, come put me to the test; lovely old book in hideous error drest. Believe me, I can quote the Koran too; the unbeliever knows his Koran best. And do you think that unto such as you, a maggot-minded, starved, fanatic crew, god gave the secret, and denied it me? Well, well, what matters it! Believe that too.”

“If instead of studying religion, men would have devoted to develop mathematics, e.g. algebra. If logic of science would have occupied the place of Sufism, faith and superstition. Religion that divides human beings would have replaced humanism.”

“Oh threats of Hell and hopes of Paradise! One thing at least is certain: this life flies. One thing is certain and the rest is lies. The flower that once has blown forever dies.”

“Impotent pieces in the game He plays
Upon this checkerboard of nights and days,
Hither and thither moves, and checks, and slays,
And one by one back in the closet lays.