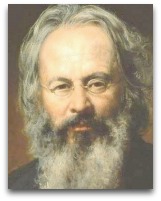 Quotes | By
The following are quotes by Brownson:

“Infidel literature, or science pressed into the service of infidelity, or even into the service of mammon, we grant, has no attractions for us, and, in our judgment, contributes nothing not really injurious to the best interests of mankind. If the reviewer thinks differently, we thank god the church does not think with him. What benefit to mankind does the reviewer think has accrued from the writings of Hobbes, Tindal (1656-1733) (Ѻ), Collins, Morgan (1806-1871) (Ѻ)(Ѻ), Mandeville (1670-1733) (Ѻ) , Voltaire, Rousseau, Helvetius, D'Holbach, Dupuis, Cabanis, Destutt de Tracy, Goethe, Schiller, Kant, Schelling, Hegel, Heine, Eichhorn, Gesenius, Paulus, Strauss, Feuerbach, Godwin, Byron, Shelley, Bulwer, Victor Hugo, De Balzac, George Sand, Paul de Kock, Eugene Sue, and hundreds and hundreds of others we might mention had we room? Genius, talent, learning, are never respectable unless enlisted in the cause of religion, unless they bow low at the foot of the cross, and lay their offerings on the altar of the crucified god. Is the reviewer prepared to deny this?”

References
1. (a) Brownson, Orestes. (1846). “Article”, Methodist Quarterly Review, Jan.
(b) Brownson, Orestes A. (1884). The Works of Orestes A. Brownson: Controversy, Volume Six: Containing the Second Part of the Writings in Defense of the Church (editor: Henry Brownson) (pg. 563). T. Nourse.