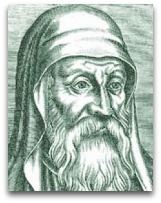 Overview
In c.230, Origen, in commentary on Genesis, said the following: [1]

“To what person of intelligence, I ask, will the account seem logically consistent that says there was a ‘first day’ and a ‘second’ and ‘third’, in which also ‘evening’ and ‘morning’ are named, without a sun, without a moon, and without stars, and even in the case of the first day without a heaven (Gen. 1:5-13)? …. Surely, I think no one doubts that these statements are made by Scripture in the form of a type by which they point toward certain mysteries.”

Another variant of this famous quote is:

“What man of sense will think that there was a first and second and third day, evening and morning, without any sun, moon, or stars? And who would be so stupid as to imagine that god, after the fashion of a human gardener, had planted a garden in Eden towards the East, and set in it a tree of life that should be seen and felt, so that one who ate of its fruit with his bodily teeth should acquire life? Why need I say more when anyone who is not blind can quote multitudes of such examples, written down as though they had occurred, and yet never having occurred in the literal sense?”

Noah's ark | Pyramid
In c.230BC, Origen alluded to the idea that Noah’s ark was pyramid-shaped, or that it's roof was the shape of a pyramid:

“l think that the ark, as much as is clear from the things that are described, had four angles rising from the bottom that gradually narrowed as they came to the peak and came together in the space of one cubit. Thus the cubit is the length and width of the peak.”

In 1452, Italian artist Lorenzo Ghiberti (1387-1455) (Ѻ) , in his ‘Gates of Paradise’ panel section, included three scenes (Ѻ) showing the Biblical story of the flood, one of which, shown below, depicting Noah and his family coming to rest outside of a "pyramid" (not a mountain), that arose out of the flood (adjacent). [2]

The pyramid shown here, to note, is interpreted by Ghiberti to be the “ark” and not actually the mountain. This pyramid ark thesis comes from Greek theologian Origen. [3]

“l think that the ark, as much as is clear from the things that are described, had four angles rising from the bottom that gradually narrowed as they came to the peak and came together in the space of one cubit. Thus the cubit is the length and width of the peak.”

Quotes | On
The following are quotes on Origen:

“If anyone does not confess that our Lord Jesus Christ who was crucified in the flesh is true god and the Lord of Glory and one of the Holy Trinity: let him be anathema. If anyone does not anathematize Arius, Eunomius, Macedonius, Apollinaris, Nestorius, Eutyches and Origen, as well as their impious writings, as also all other heretics already condemned and anathematized by the Holy Catholic and Apostolic Church, and by the aforesaid four Holy Synods and [if anyone does not equally anathematize] all those who have held and hold or who in their impiety persist in holding to the end the same opinion as those heretics just mentioned: let him be anathema.”

“Origenes wished to interpret the waters above the heavens, as described in the first chapter of Genesis, as being angels who enjoy the sight of god, and the lower waters as the devils who have been banished from the heavens for their wrongdoing.”