In science, origin of life was a sort of puzzle, aka "origin of life problem" or "great problem of natural philosophy", grappled with regarding the conditions, time-frames, physics, and chemistry involved in the supposed transition from non-life to life, or when life started in the metamorphosis from hydrogen to human in the great chain of being or coupled mechanism of chemical reaction synthesis and analysis.

The following overview by American physicist John Gribben summarizes the way most modern people think about the question of the origin of life:

“That all living organism share the same four letter alphabet and common DNA language, is convincing evidence that we are all descendant from one uniquely successful ancestor, whether that ancestor first appeared inside a comet [spore life] or in Haldane’s primeval soup [light/heat-made life] or in Darwin’s warm little pond [lightning-made life].”

which summarizes the three main origin of life theories.

Theory | Histories
In 1933, German chemist Edmund Lippmann, in his Spontaneous Generation and Life Force: the History of these Problem from the Earliest Times up to the Beginning of the 20th Century, according to Alexander Oparin (1936), gave a fairly complete survey of all the theories of the origin of life, from ancient times to the early 20th century. [22]

Perpetual motion
The majority of all origin of life theories, in large part, amount to perpetual motion of the living kind theories (e.g. self-motion); the following is an apt illustration of this: 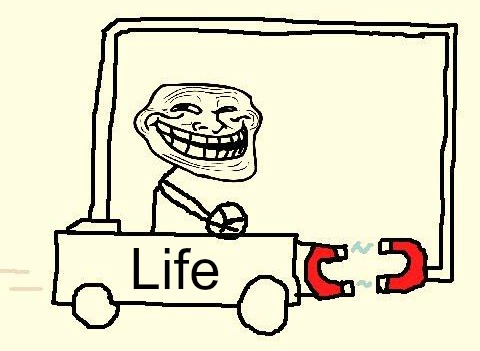 List
The following are the main historical "origin of life" theories listed chronologically:

Among this list, the "meteoroid theory" is somewhat recent, and adhered to by some at present. In 1834, Jacob Berzelius obtained samples of the Alais meteorite (a meteorite that had fell near the town of Alais in France in 1802) and subjected them to chemical analysis, and found the presence of carbon compounds, which to Berzelius meant life. [16] This seems to have been the start of the so-called "comet origin of life theory".

French chemist Marcellin Berthelot isolated “coallike” material from the 1864 Orgueil meteorite and under the microscope, tiny spherical grains were revealed, coated in carbonaceous material, which reminded Berthelot of fossilized bacterial cells. [16] Other similar theories were put forward by those including: William Thomson (1871), Hermann Helmholtz (1879), and Svante Arrhenius (1903).

In 2015, Martha Grover, et al, in their “A Chemical Engineering Perspective on the Origins of Life”, gave the following conceptual diagram (left), indicative of the ideology most modern scientists have in mind in respect to the origin of life question, which shows a pre-biotic or primordial soup earth reducing atmosphere model overlaid with the Miller-Urey experiment; about which they ruminate on, as quoted below (right): [21]

Beliefs
Recent estimates indicates of polled Americans, yield the following opinions on the question of the origin of life: [14]

In other words, about 42% of Americans believe in the Bible, that humans were created, in their present form, some recent time in the past, i.e. circa 6,000-years ago, 21% believe in god-directed evolution, and 26% believe in one or another variations of Charles Darwin's theory of evolution from a warm pond.

Overview
The question became an issue in the years to follow the 1859 publication of English naturalist Charles Darwin’s Origin of Species. The subject is often approached using the universal science of thermodynamics, being that its laws apply equally to both realms. [1]

The modern, post 2008 view, as outlined below, is that the concept of life, or of the supposed existence of living things, is defunct. It is scientifically incorrect to say that either subatomic or superatomic entities are "alive". The correct view is to say that what, in the past, were considered as "biological", e.g. a moving bacteria or a breathing human, are merely carbon-centric reactive "animate molecules". A human, for instance, is a 26-element human molecule that has been synthesized, by the operation of universe, over the course of the last 13.7 billion years.

The concept of life, in its most probable origin, is a vestigial theory of olden days religion, derived primarily from the Egyptian Ra-based theological theory a divine "breath of life" imparted to a living thing to give it life, in conjunction with a morality-based theory of afterlife/resurrection/reincarnation or of universal continuity, as this passed into the Abrahamic/Brahamic religions of the world, the basis of over 80 percent of the world's religious thinking, as regarding the concept of life.

The following table outlines the defunct view of life and the search for the origin of life:

In 1982, in the famous case of McLean vs. Arkansas Board of Education, on the debate of whether creation science should be taught in public schools, American biophysicist Harold Morowitz was designated an expert in biophysics and biochemistry and was tasked with demonstrating that the origins of life did not violate the laws of thermodynamics. [2]

Difficulties on theory
Crude estimates, based on carbon-dating of fossilized bacteria, indicate that life originated on earth circa 3.85 billion years ago. [3] The difficulty here is that a single bacterium is a single molecule, i.e. a “bacteria molecule”. The question immediately becomes: at what point can a molecule be considered to be alive? In making attempts to answer this question, one runs into insurmountable difficulties. [4]