In astronomy, Orion is noted constellation, comprised of 14 stars, originally personified by the Egyptians as the god Sah, and later blended into the story of the god Osiris, noted for []

Overview
The Egyptians considered the Orion nebula to be the final resting place of Osiris, after he was murdered, and cut into 14 pieces, and scattered about the land, by his evil brother Set. [1]

Belt
In 1983, Robert Bauval, while sitting out in the desert of Egypt with a friend, was told by his friend that the star Sirius would rise and that in the belt of Orion, the three stars run in a row, but that the smallest star was slightly off-set to the left. Bauval then realized that this off-set was the same as the off-set of the above-view of the three pyramids at Giza. [4] Bauval, in short, concluded that the three great pyramids were build modeled on the three stars of Orion's belt: [3] 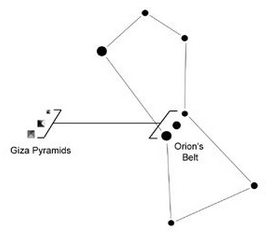 Scholars later began to assert that this was a global phenomena:

Horus | Orion
The following, from Senemut’s tomb tablet (1463BC), is Horus as Orion spearing the bull, the “leg of the bull” being the Pleiades constellation: (Ѻ) 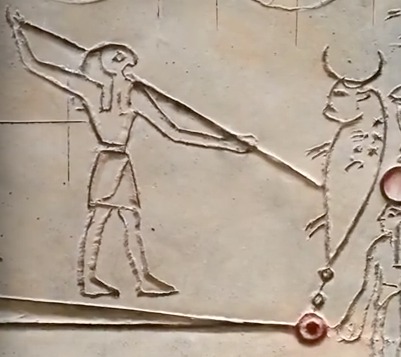 “That we celebrate Dec 25th, based on the fact that three stars of Orion’s belt, aka “three kings”, align with the star Sirius, to point out the position of the rising sun, following the winter solstice, i.e. day of least amount of sunlight hours of the year, following the apparent “death” of the sun three days earlier, on the cross, i.e. “southern crux” star constellation, which originated with the celebration of the 3100BC (4850BG) birthday of Ra in the temples on Dec 25, wherein, of note, the Egyptians put pine trees in temples (origin of Christmas tree tradition), which was remolded into the story of the birth of Osiris (2800BC), then Horus (1800BC), then Jesus (300AD), with such joyous ignorance, has us “marching backwards into 20th century”, as the saying goes, or 49th century (BG), as we would see it.”