In Egyptian mythology, Osiris, "Asar" or "Wesir", in Egyptian form, is the Egyptian death and resurrection god, symbolic of both the moon, the Orion constellation, and annual crop regrowth, depending; in Heliopolis creation myth, he is the great grandson of the god Ra, sun of Geb (see: Easter), father of Horus, and husband-brother of Isis, brother rival of Set, noted for []

In 2287BC, in the Pyramid Texts of Pepi I, Osiris was being associated with the Orion star constellation, the dying and rising pharaoh (or hunter):

“Hail, O King! Thou art this great star, the bearer of Orion, who ferries the ship of heaven with Orion, who rows the ship of Dewat with Osiris. The king goes forth from the eastern part of heaven, reinvigorated in his season and fresh in his time. Nut gave birth to this King together with Orion. The Year (?) has adorned thee together with Osiris.”

Osiris, at some point, before or after this, was synced with the god Sah.

Isis | Osiris
Matthew Firestone, in his Egypt (2010), summarized the basics of the story of Isis and Osiris as follows: [1]

“The most familiar of all ancient Egypt's myths is the story of Isis and Osiris, preserved in the writings of the Greek historian Plutarch (c AD 46-126) following a visit to Egypt. According to Plutarch, Osiris and his sister-wife Isis ruled on earth, bringing peace and prosperity to their kingdom. Seething with jealousy at their success, their brother Seth invited Osiris to a banquet and tricked him into climbing inside a chest. Once Osiris was inside, Seth sealed the coffin and threw it into the Nile, drowning his brother. Following the murder, the distraught Isis retrieved her brother-husband's body, only to have it seized back by Seth who dismembered it, scattering the pieces far and wide. But Isis refused to give up and, taking the form of a kite, searched for the separate body parts, burying each piece where she found it, which explains why there are so many places that claim to be Osiris' tomb. Another version of the story has Isis collecting the parts of Osiris and reassembling them to create the first mummy, helped by Anubis, god of embalming. Then, using her immense magic, she restored Osiris to life for long enough to conceive their son Horus. Raised to avenge his father, Horus defeated Seth. While Horus ruled on earth, represented by each pharaoh, his resurrected father ruled as Lord of the Afterlife. A much-loved god, Osiris came to represent the hope for salvation after death, a concept as important to life-loving ancient Egyptians as it was to early Christians.”

Here we see Plutarch (c.100AD) cited as one of the first to document the Osiris death and resurrection story. Herodotus, however, prior to this had described the birth of Ra as the story of the phoenix.

In Dendera (Ѻ), a site 37-mi north of Luxor (Thebes), in the 6th nome of Upper Egypt, in the Dendera temple complex, a 23-part story board scene, built during the late Ptolemaic period, in the first century BC, completed by Roman emperor Tiberius (Ѻ), in 14 to 37AD, depicts the resurrection of Osiris and the immaculate conception of Horus. [8]

The following shows the god Sah (or Sahu), i.e. Orion constellation, as the Greeks later referred to it, with arm raised, the constellation god that was merged with Osiris, the idea behind the raising of Osiris from the dead: [9] 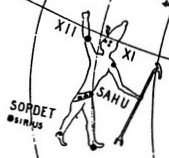 The following, from the Dendera Temple (Ѻ), shows Osiris, arm raised (like the constellation god Sah), with erection, with Isis, in kite form, hovering over Osiris, with the yellow body outline, symbolic of the Orion constellation in horizontal position, with a djed pillar overlaid on the body, indicative of his backbone, and or the four pillars of heaven, or something to this effect: 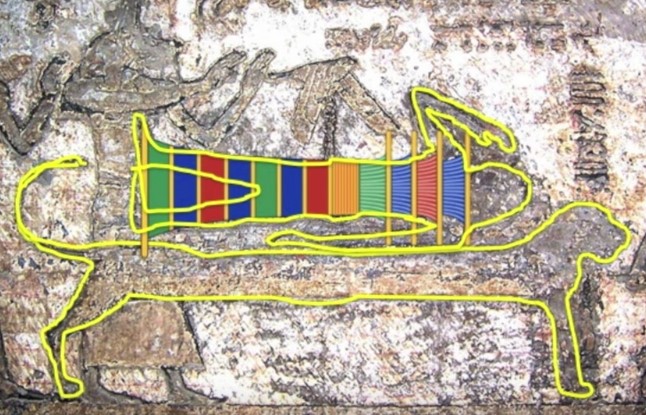 The Osiris chapel, in Dendera, was used during the Osiris festival in the month of Khoiak (see: Christmas tree), which celebrated the resurrection of Osiris. (Ѻ)

The roots of Osiris date to the sun god worship of the ancient city of Heliopolis and their Heliopolis creation myth; the city itself having been active and occupied since pre-dynastic times, or before 3100BC.

In c.1500BC, the separate afterlife re-birth myths of Osiris and Ra were being joined into one myth, retold in a combined manner, so to give the deceased double afterlife power, so to say; a take on this is as follows:

“The very sub-title of the Book of the Dead: the Chapters of Going Forth by Day, evokes an image of the soul emerging into the restorative rays of the sun’s light after revival during the nighttime in the underworld. Most Egyptian mortuary texts are like the Book of the Dead in this respect—they view the life beyond the grave as combining a chthonic Osirian afterlife with a solar or stellar afterlife. The Egyptian sense of balance meant that both aspects of life beyond the grave were necessary for the survival of the dead. The chief celestial deity, the sun god Ra, was therefor a major figure in the Egyptian concepts of the afterlife, second only to Osiris.”

Jesus
In 1841, an anon German-Jew, publishing out of England, in his The Existence of Christ Disproved by Irresistible Evidence, in a series of 30 letters, attempted to argue the following position: [4]

“If it can be shown, by clear and indisputable evidence, that the history of Jesus Christ (as commonly received among Christians) is a forgery and a fiction—that he was not the son of a virgin called Mary, the wife of Joseph the carpenter, who conceived through the power of the holy ghost, and ceased not to be a virgin even after she had become a mother—that he did not converse with the Jewish doctors in the temple—nor preach to the populace in Jerusalem and elsewhere—nor perform miraculous cures—nor hold communion with the devil—nor, in point of fact, do any one act that pious enthusiasts and ignorant devotees have ascribed to him; and further, that neither a god nor a man called Christ was crucified by Pontius Pilate, the Procurator, and therefore could not by possibility have arisen from the dead three days after an event which did not happen, and ascend into heaven, as is vulgarly supposed, —if, we repeat, it can be clearly proved that the foregoing assertions about the birth, life, death, and resurrection of Jesus Christ, are idle, tales, having no foundation whatever in truth—mere fictions stolen from the mythological fables of ancient nations,—the very root of the Christian system will be as nought!”

In 1877, William Cooper, in his The Horus Myth in its Relation to Christianity, touched on Osiris, but put more focus on Horus, stitching out the premise that Jesus was based on Horus.

In 1878, John Stuart-Glennie, in his Isis and Osiris: the Origins of Christianity, penned out a treatise on the similarities and differences of the “doctrines of Christianism” and the “myths of Osirianism”, as he phrased things. [2]

In 1883, Gerald Massey, in his The Natural Genesis, was outlining Osiris and Jesus connections. (Ѻ)

In 1885, an anon English writer, in his The Faith in Jesus, Not a New Faith, stitched out the premise that both Jesus and Krishna, were rewrites of Osiris. [3]

“Osiris, their King and Lord, they portray by means of an eye and scepter; there are even some who explain the meaning of the name as ‘many-eyed’ on the theory that os in the Egyptian language means ‘many’ and iri ‘eye’’ and the heavens, since they are ageless because of their eternity, they portray by a heart with a censer beneath.”

“They say that the date on which this deed – Set trapping Osiris in chest and throwing it into the Nile – was done was the seventeenth day of Athyr [Nov 13] when the sun passes through the Scorpion, and in the twenty-eighth year of the reign of Osiris; but some say that these are the years of his life and not his reign.”

“Not only the Nile, but every form of moisture they call simply the effusion of Osiris; and in their holy rites the water jar in honour of the god heads the procession. And by the picture of a rush they represent a king and the southern region of the world, and the rush is interpreted to mean the watering and fructifying of all things, and in its nature it seems to bear some resemblance to the generative member.”

“What emerges clearly from a study of the Horus myth and the Osiris myth is that although they appear in the Pyramid Texts as a composite story they were not originally so.”

“The frequent mention of ‘nephrite’, a type of green stone, relates to the green color of many amulets, particularly the important ‘heart scarab’. The Egyptian word for green also meant to ‘to flourish’, with all of its implications of revitalization in the afterlife. The hoe of emerging reborn from the earth, just as vegetation does yearly, is written in the green color of Osiris’ face in the Ani Papyrus.”

— Ogden Goelet (2015), “A Commentary on the Corpus of Literature and Tradition which Constitutes the Egyptian Book of the Dead (the Book of Going Forth By Day)” [10]

Further reading
● Griffiths, John G. (1980). The Origins of Osiris and His Cult. Brill.