In religio-mythology, Osiris-Horus, or “Horus-Osiris” (which renders as "Horus Christ"), similar to joint god Amen-Ra, refers generally to the syncretism of the gods Osiris and Horus amalgamated into one god, united in traits, background, and characteristics, which occurred predominately in the Roman recension, from 50BC to 400AD, when the traits of Osiris, e.g. being able to rise from the dead, god the father, etc., and Horus, e.g. the savior and professor of morals, were reformulated into the character of Jesus Christ (see: Osiris rescripts).

Pop culture
Some of the conduits via which the Osiris + Horus to Jesus connection have been disseminated to the general public, include: Dan Brown's 2003 The Da Vanci Code, which sold 80+ million books translated into 44 languages, and the films The God Who Wasn’t There (2005) (Ѻ)(Ѻ), by Brian Flemming, Zeitgeist (2007), by Peter Joseph, and Religulous (2008), featuring Bill Maher, through which the general public has been enlightened, in a taste like manner, about the mythical origins of modern religions.

Egyptian
Originally, of note, Horus and Osiris were two completely different and unrelated god, Horus being the oldest god in Egypt, according to Wallis Budge. In c.3100BC, in the Heliopolis recension, Osiris became the father of Horus, according to Heliopolis creation myth. The pharaohs all perpetuated the belief, accordingly, that they were the god Horus while in existence, and then became the god Osiris in the afterlife; John Griffiths (1980) summarizes this as follows: [1]

“The Egyptian treatment of the myth of Osiris is constantly presented, as we have seen, in the setting of death; and it is also constantly related in its early phases to the fact of kingship. Horus as the living Pharaoh and his father Osiris as the dead Pharaoh: these are the basic elements in the royal funerary cult. Osiris per se is king of the domain of the dead, so that the dead Pharaoh is naturally regarded as aspiring to sovereignty in the afterworld in the form of Osiris. At the same time the royal burial rites adumbrate the birth of a new Horus in the son who succeeds the deceased. As for the deceased King, he is urged to sit on the throne of Osiris; he inherits now the sovereignty of the dead.”

Griffiths refers to the manner in which the older “Horus myth” and the newer “Osiris myth” were merged together, in the 4th Dynasty (2613-2498 BC), in the form of a god family (see: paut), in the Heliopolis creation myth, as “mythological fusion” (Ѻ).

In the period 100BC to 500AD, during the Roman recension, a further mythological fusion occurred wherein, using a combination of the Hebrew “god to prophet” god reduction method and Egyptian god fusion method, the myths of Osiris and the myths of Horus were merged into the character of the man god Jesus.

Over time, as the Egyptian dynasties began to wane in power, and come to an end, the Osiris-Horus myth god king myth structure began to culturally migrate to neighboring civilizations as these began to rise on power.

Sumerian | Tammuz & Adonis
In c.1600BC, in Mesopotamia and Syria, the Osiris-Horus model was molded into the story of Tammuz and Adonis, albeit in this scheme the Sumerian, Babylonian, and Assyrian rules called themselves, not “gods”, but priests or priest kings. The god as king models, beginning in about c.1600BC, was losing cultural hold.

Roman | God & Jesus
In c.100AD, as the Roman empire began to rise in power, in the so-called Roman recension, the Osiris-Horus model was reformulated such that the Emperor was the ruler of Rome, the priests, run by the senate, controlled religion, and Osiris was detached from the king by becoming “god the father”, whereas Horus became “god the son”; summarized (Ѻ) as follows: 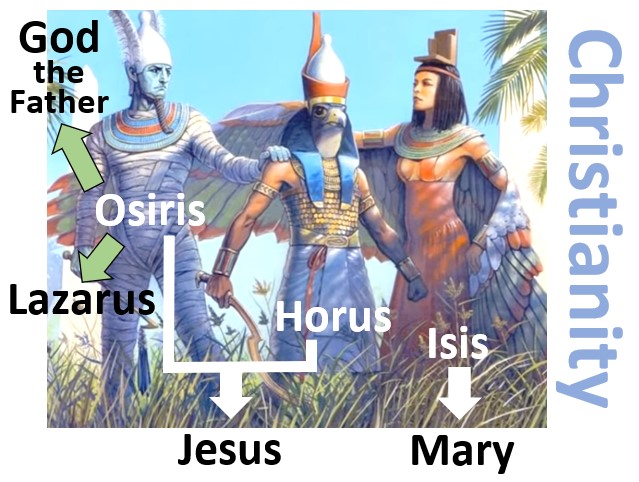 Or, said another way: 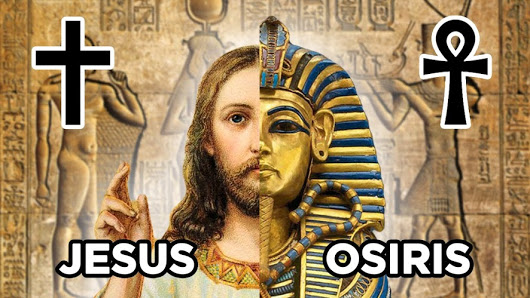 In 2008, Dorothy Murdock, in her Christ in Egypt: the Horus-Jesus Connection, summarized the main points of "Osiris + Horus = Jesus" syncretism as follows: [2]

“In ancient mythology, in which immortal gods can die, the death of a deity is very significant and is often attended by a sentiment of redemption and salvation, such as the ultimate sacrifice of god's son in Jesus Christ. We have already seen how Osiris and Horus both were betrayed and murdered by their brother/uncle Typhon/Set, with Osiris's death plotted during a sort of "Last Supper" gathering. But were either Osiris or Horus "crucified," as has been claimed by a number of writers? Firstly, when it is asserted that Horus (or Osiris) was "crucified," it should be kept in mind that it was not part of the Osiris/Horus myth that the murdered god was held down and nailed to a cross, as we perceive the meaning of "crucified" to be, based on the drama we believe allegedly took place during Christ's purported passion. Rather, in one myth Osiris is torn to pieces before being raised from the dead, while Horus is stung by a scorpion prior to his resurrection.”

Here, Murdock's mention of Osiris' death plotted during a sort of "Last Supper" refers to how the story of Set inviting Osiris to a big dinner and then tricking him into getting into a "chest" that just fit the body size of Osiris, after which he threw the chest into a river (see: Christmas tree), became the New Testament story of the final meal, aka Last Supper (Ѻ), that, in the Gospel accounts, Jesus shared with his Apostles in Jerusalem before his crucifixion; during the meal Jesus predicts his betrayal by one of the apostles present. In the original version, Set betrays his brother Osiris during Osiris’ last meal.

“The assertion that ‘Osiris’ son Horus has the exact same bio of Jesus’ is just based on misinformation. This is garbage that’s spread on the Internet, that just isn’t true. What’s funny about this is that these people who say this kind of thing, never seem to quote the primary sources. They tell you that this is in Osiris OR Horus, but you never see the primary sources quoted. When you look at the primary sources, you find out that they’re not at all parallel.”

— William Craig (2012), response (Ѻ)(Ѻ) to audience member who asks about the Osiris/Horus and Jesus parallel, Feb 24