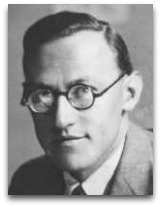 In hmolscience, Oskar Morgenstern (1902-1977) was a German-born Austrian economist notable for his 1938-1944 game theory and utility theory collaborations with his friend John Neumann, resulting in the 1944 jointly-published Theory of Games and Economic Behavior, wherein "heat" discussions are utilized.

Heat | Economic behavior
In 1944, Morgenstern and Neumann jointly-published Theory of Games and Economic Behavior, in the preface of which they state the following:

“This book contains an exposition and various applications of a mathematical theory of games. The theory has been developed by one of us since 1928 and is now published for the first time in its entirety. The applications are of two kinds: On the one hand to games in the proper sense, on the other hand to economic and sociological problems. Our aim is primarily to show that there is a rigorous approach to these subjects, involving, as they do, questions of parallel or opposite interest, perfect or imperfect information, free rational decision or chance influences.”

The above “the theory has been developed by one of us (1928) and now published in its entirety” seems to credit Neumann with the bulk of the writing. Canadian economist Robert Leonard in fact asserts that according to historical study Neumann had previously written most of the book without Morgenstern’s help. [6]

Anti-reductionist?
In 1999, Italian game theory biographers mathematician Giorgio Israel and Ana Gasca, assert that “Neumann was later to claim that a worthwhile foundation of mathematical economics should be based on the rejection of mechanical and physical reductionism and on the creation of a new kind of mathematics better suited to the specific nature of socio-economic phenomena.” [7] In 2007, Israel argues again that Neumann, as early as 1928, and thereafter, had a polemical attitude to general economic equilibrium theory of the Leon Walras variety, a model that Israel refers to as “dreary reductionism”. [9] Likewise, in 2014 Israel elaborated: “the fact that von Neumann (and Morgenstern) were strongly opposed to the mechanical reductionism of the Walras-Pareto mathematical economics is trivially evident and well known.” [8]

“Cellular automata were conceived in 1948 by John von Neumann, whose motivation was in finding a reductionist model for biological evolution [vonN51].”

“Based on his general approach, one may say von Neumann was a psychophysical reductionist.”

The situation with Morgenstern, however, may be different? In 1970, e.g. Morgenstern gave the following retrospect two natures and or unbridgeable gap stylized statement: [2]

“Game theory is a new discipline that has aroused much interest because of its novel mathematical properties and its many applications to social, economic, and political problems. Earlier efforts were oriented on the physical sciences and inspired by the tremendous success these have had over the centuries. Yet social phenomena are different: people are acting sometimes against each other, sometimes cooperatively with each other; they have different degrees of information about each other, their aspirations lead them to conflict or cooperation. Inanimate nature shows none of these traits. Atoms, molecules, stars may coagulate, collide, and explode but they do not fight each other; nor do they collaborate. Consequently, it was dubious that methods and concepts developed for physical sciences would succeed in being applied to social problems.”

Here, paradoxically, Morgenstern seems to hold the view that molecules, at least inanimate molecules, have one nature, whole humans have a different nature. Likewise, in 1973 Morgenstern commented that: [9]

“[The notion of stability that emerges in connection with imputation and stabile sets] has nothing to do with the usual equilibria of physics … indeed the present notion differs so profoundly with the usual ideas of stability and equilibrium that one would prefer to avoid even the use of the words. But no better ones have yet been found.”

Education
Morgenstern completed his economics PhD in 1925 on the subject of marginal productivity; thought, as he says, he was constantly troubled by the Bohm-bawerk theory of bargaining and of the “marginal pairs”, while dealing with fundamentals, could not be considered complete. This led him, while still in Vienna, to the work of Francis Edgeworth, whom he visited during his 1925 trip to America, specifically his contract curve theory in his Mathematical Physics (1881). [3]

In 1928, Morgenstern published Economic Forecast, in which he addressed the double blind placebo issue of “influence of prediction on predicted events”, a problem peculiar to the social sciences, but not to the physical sciences. [4] As Tom Siegfried explains, in his chemical analogy elaborations: [5]

“When a chemist predicts how molecules will react in a test tube, the molecules are oblivious. They do what they do the same way whether a chemist correctly predicts it or not. But in the social sciences, people display much more independence than molecules do. In particular, if people known what you’re predicting you will do, they might do something else just to annoy you.”

That year, mathematician Eduard Cech told Morgenstern that John Neumann’s 1928 paper on parlor games contained ideas on the anticipations of anticipations recursive loop issue of prediction, after which Morgenstern became entranced, and desired to meet Neumann.

From 1929 to 1938, Morgenstern taught economics at the University of Vienna.

In 1938, Morgenstern accepted a three year appointment to lecture at Princeton University, for the sole reason—Neumann being then working at the nearby Institute for Advanced Study—of the “possibility that I might become acquainted with von Neumann.” [5] The two eventually met; Neumann began to critique early drafts of a paper of Morgenstern on the relevance of game theory to economics; the result was 1944 jointly-published Theory of Games and Economic Behavior, the bible of game theory, thought some assert that Neumann had previously written most of the book without Morgensern's help.