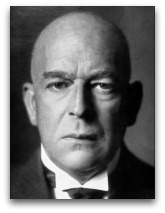 Overview
In 1918/1922, Spengler published his two-volume The Decline of the West, wherein, as discussed by Greg Myers, he devoted a certain amount of discussion to entropy, in particular he supposedly alludes to a cyclical entropy-based theory of the rise and fall of civilizations: [1]

“What the myth of Gotterdammerung signified of old, the myth of entropy signifies today—the world’s end as completion of an inwardly necessary evolution.”

The German Götterdämmerung is a translation of the Old Norse phrase Ragnarök, which in Norse mythology refers to a prophesied war of the gods that brings about the end of the world. [2]

In 1945, American physical historian Morris Zucker commented how Spengler’s work had a 15-year intellectual acceleration on the intelligencia: [4]

“Over thirty-seven years ago, Seligman first published his Economic Interpretation of History. It has gone through several printings, editions and translations. In itself that work is a living example of the peculiar myopia which afflicts the intellectual world. Sometimes it takes ten or fifteen years for that world to catch up with a Spengler. Kyserling was more transparent. Seligman himself in 1902 commented upon the fact that fifty years after Marxism had made its first appearance and had stirred to the depths economic, social and philosophical thought among European scholars, here in America Marx was scarcely known outside of a few obscure immigrants socialists.”

an example of the so-called "catch up effect".

Goethe | Nietzsche
Spengler immediate inspiration was his perception that the civilization of the west since the late nineteenth century was exhibiting the same symptoms as ancient civilization in its decline. He acknowledged the influence primarily of Goethe and Nietzsche; to them he owed “practically everything”. (Ѻ)

“Today we live so cowed under the bombardment of this intellectual artillery that hardly anyone can attain to the inward detachment that is required for a clear view of the monstrous drama. The will-to-power operating under a pure democratic disguise has finished off its masterpiece so well that the object's sense of freedom is actually flattered by the most thorough-going enslavement that has ever existed.”