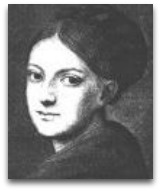 In existographies, Ottilie Pogwisch (1796-1872), or “Ottilie von Goethe” by marriage, is was the daughter-in-law of Johann Goethe, wife of August von Goethe, whom she married in 1817, and the one present beside the elder Goethe during his "more light" 1832 last words.

Overview
Nobility, she was the daughter of Wilhelm Julius von Pogwisch and Henriette Ulrike Ottilie Gräfin Henckel von Donnersmarck. Her parents separated when she was very young and she traveled with her mother, a countess, until they finally came to Weimar in 1806. [1] She soon becoming good friends with Adele Schopenhauer (1797-1849), sister of Arthur Schopenhauer (1788-1860), daughter of Johanna Schopenhauer (1766-1838), the women in whose home Goethe and his new scandalous bride Christiane made their first public appearance.

She was intelligent and after an unhappy love married August von Goethe on June 17, 1817. Their marriage was very unhappy but they had three children. [1]

Ottilie von Goethe is one of the most controversial women of her time. Her restlessness, energy and unconventionality made her a sought-after, but also despised woman who had to endure numerous slanders especially after Goethe's death. Especially after the birth of her illegitimate daughter Anna, in 1835, which she had conceived together with a British officer, there were increasing rumors and eventually culminated in the assertion that she had killed her eldest daughter Alma. [2] The established reason, however, is that Alma Goethe (1827-1844) met her reaction end at the age of 17 during the typhoid epidemic.

OTTO
There may have been a possibility that "Ottilie" Pogwisch had suggestive influence the character of "Ottilie" of Goethe's Elective Affinities and in turn the OTTO name root puzzle, being that her entry into Weimar circle occurred two years before 11 Apr 1808 when Goethe begins to work on Elective Affinities according to diary entry. This, however, is pure speculation at this point.