In cryptography, Otto, or "otto cypher" (see: OTT), refers to a coded etymological term (name, root, and suffix) used overlappingly by German polymath Johann Goethe to represent or relate four different characters in his 1809 novella Elective Affinities, namely: Otto, the name of both Eduard (Eduard Otto), in youth, and the Captain (Hauptmann Otto), in baptism, the two leading male characters in the novella, and CharlOTTe and OTTilie, the two leading female characters, as well as the name of the child Otto (or Ott), born out of the mental double adultery or double elective affinity reaction (double displacement reaction) that takes place over the course of the novella. Much work and speculation has been done in effort to decode this riddle, some of which is summarized below.

On 9 May 1809, Goethe sent a letter to Charlotte von Stein, referred to her as “St. Ottilia”, in reference to Saint Ottilia, the patron saint of vision restoration. [1]

“Are you not both named Otto?”

"... very artfully contrasted with each other in groups [which occur in polar relationships]"

In 1911, German biographer Albert Bielschowsky, in his biography of Goethe, alluded to the argument that the name or root name OTT has some type of hidden relation to Saint Ottilia, a 15th century abbess, the patron saint of suffers from eye diseases, typically depicted in artwork holding a book with a pair of eyes (or reading stones) in her hands, of which Goethe had painted on his visit to Odilienberg, when a student at Strasburg, an image that supposedly, according to Bielschowsky, later came to be blended together with his experiences with Minna Herzlieb, the daughter of a local book seller whom he had fallen or almost fallen for. [1]

In 1981, Heinz Schlaffer, in his “Names and Characters in Goethe’s Elective Affinities”, argued that “Otto” became a cypher for the inevitable death of the infant. [14]

In 1998, Scottish biographer and German literature lecturer John Williams, in his The Life of Goethe, gave one of the best summarizes of Goethe's intricate use of this anagram. Williams surmises that Eduard, Charlotte, Otto form ECHO—which in turn relates to allusions to the myth of Narcissus and Echo and various points. Charlotte, Hauptmann (Captain), Eduard, Mittler, form CHEM (see: CHEM cypher; chemistry etymology)—a significant acronym for the main theme of the novella (chemistry), even if, according to Williams, “Mittler (the mediator) fails to catalyze or restore the relationship between Charlotte and Eduard." Ott is the stem of the names of Eduard (one of whose name in youth was Otto), Charlotte, the Captain, Ottilie, and the child. [4]

As an anagram, OTT becomes TOT (dead); as a palindrome, OTTO represents an ironically harmonious mirror-image. Ottilie is near enough to OTT-LILIE: lilies are “symbols of purity, attributes of the Virgin Mary”, according to Williams. [4] This Virgin Mary speculation by Williams, to note, is likely erroneous, being that Goethe’s 1770 PhD dissertation (rejected on the grounds that it was unorthodox) “The Legislature, On the Power of the Magistrate to Determine Religion and Culture”, at the University of Strasbourg, contended, among other things, that “Jesus Christ is not the author of Christianity, but rather a subject composed by a number of wise men and that Christian religion is merely a rational, political institution”; which as as Goethe surmised correctly turns out to the case, being that we now know that the story of Jesus Christ, and hence Christianity, is based on the myth of "Osiris Anointed" and Ra theology in general. [5]

The initials E and O, such as are engraved on the glass that gets symbolically destroyed, according to Williams, are not only the initials of Eduard and Ottilie, or Eduard and Otto, but also of Eurydice and Orpheus—which, according to Williams, relates to the symbolism of Mittler as Hermes, the ubiquitous messenger and Psychopomp, the conductor of souls to the underworld.

Lastly, the cryptic encodings of the novel have been related, somewhat obscurely, to Mittler’s win of the lottery: L-OTTO. [6]

In 2001, Germanic studies professor Astrida Tantillo noted that it has frequently been pointed out that the four main characters as well as the child that is born share the same root name "Otto". [2] Both Eduard and the Captain were called OTTO in youth; the two women CharlOTTE and OTTilie, have related names; and the misfortune child born out of the "mental" double adultery (or double elective affinity) of the four main characters (reactants) is called Otto. [3]

Opinions differ as to why Goethe used this naming riddle, but the modern chemical view would argue that Goethe intended the reader to grasp the logic that each person is a different type of "human chemical" (or human molecule) in essence.

“It is likely that Goethe situated this curious puzzle piece to signify the reality that each character in the novella or each human in the world, underneath, is simply a different chemical species, each with varying amounts of affinity for one another.”

In short, it is very possible that Goethe intended the literary device as one of his many "hidden elements", as he put it, to the effect that the world or "future", as he put it, come to "see" people as reactive chemicals or human molecules (modern sense); something along the lines of a combination of "I see ships" and "seeing the forest among the trees" (e.g. see Jean-Marie Lehn section of equation decoding) in the sense that the future or progress of human knowledge would restore vision to humankind, and begin to see people and relationships in the true human chemical thermodynamic sense of the matter?

“Bergman’s theory of ‘elective affinity’ seems to describe the shifting relationships of the protagonists, Eduard, Charlotte, Ottilie and the Captain. In this sense, the novel can be read as an exercise in reductionism: like elements, the characters seem to have no choice but to make new bonds when a reagent is introduced. Even their names reinforce this. Both Eduard and the Captain were christened Otto, so the repletion of the ‘ott’ in the names of the characters emerges as a sign of affinity.”

This seems to be incorrect in that Goethe, e.g. as found in assumed to have been conceptualized "human" affinity table (see: Goethe’s affinity table), situated affinity forces, reactions, and tendencies between all the characters in the novella, not just the for main protagonists; also as the term "Ott" was symbolic, in Goethe's mind, with the restoration of vision, his intention was to situation the view that the vision restored to humanities, when the deeper nature of his theory was absorbed, would be a new view of humanity, of the “molecular goggles” type of advanced perspective or "super observer" Matrix code seeing sort of vision restoration, as Albert Szent-Gyorgyi speculated about in the 1960s.

In 2015, Libb Thims, in his “Zerotheism for Kids” lecture, explained to the children that Goethe employed the Ott cypher as a means to explain that when we one comes to see people each as different but unique types of “chemicals” that a new “vision”, previously blinded, of meaning and morality would be restored; a visual of this as follows (lecture #6 (0:00-1:35); slide #15): [12] 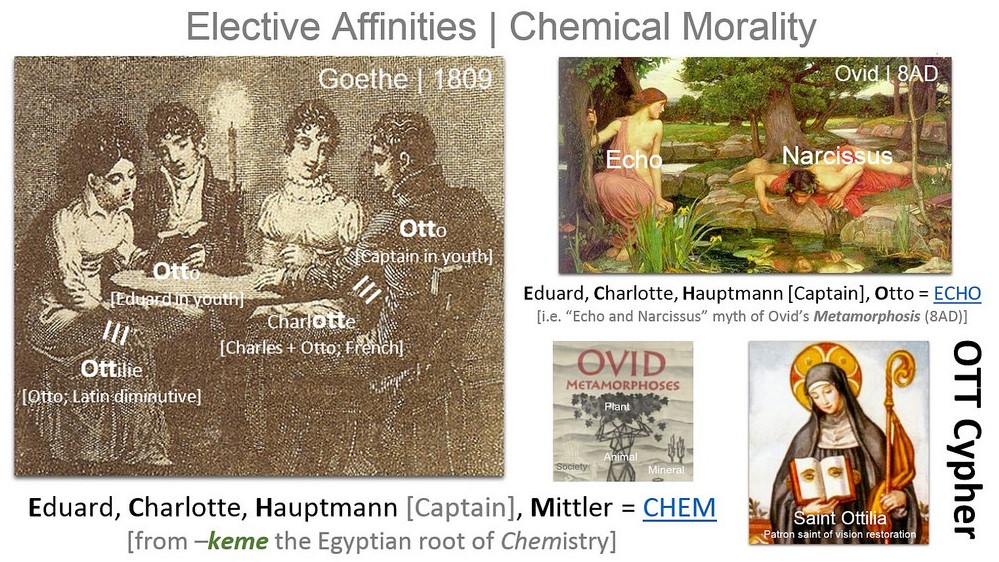 Thims then summarized this to the children as follows:

“When you start to see the world though chemical eyes or Gibbsian eyes then you’ll have a new morality.”

In short, in modern term, each person as being OTT-based, in the novella is prototype to the late 19th century model of each person being carbon-based or C-based, which is equivalent to, in the early 20th century, of each person being a CHNOPS-based chemical; such as stated by German physical chemist Wilhelm Ostwald, a modern Goethean human chemical theory philosopher, about himself, in 1926, as follows: [13]

“I am made from the C-H-N-O-S-P combination from which a Bunsen, Helmholtz, Kirchhoff came.”

Goethe, in short, was trying to say, in code, speaking in modern terms, that each of his four main protagonists, with the name root "OTT", was a "CHNOPS combination", as Ostwald would say, or, in modern terms, a "powered CHNOPS+20 chemical" (or molecule), whose affinities and combinations are determined by the elective affinities (or free energies in modern speak).

Other
In 2005, German director Doris Dorrie, in the film The Fisherman and His Wife (Der Fischer und Seine Frau), employed the name Otto to explore marriage through the two types of Ida-Otto couples: one a happy marriage, the other a cursed marriage, in a way that is said to be reminiscent or similar to Goethe's usage. [7]

In 2008, American author and former exotic dancer Megan Clark, published Seduce Me, which is said to be a modern variant of Goethe’s Elective Affinities, supposedly with emphasis on the full carnal details that Goethe left out; although, it seems, the novel has little to do with actual chemistry, aside from the word being mentioned twice, in a purely metaphorical sense, namely in respect to the “chemistry between them” and the “fire of their chemistry” being more like “sliding a match across a specified surface and getting an instant flame”. [8] The character Charlotte, of the two lead females in the novel, one reserved, the other non-reserved, is the one who embodies a person who follows their sexual desires to their fullest.