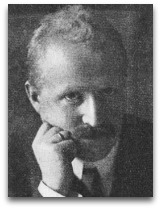 Berkeley school
Sackur’s textbook was translated into English in 1917 by Scottish-born American chemist George Gibson at the University of California, Berkeley; where it was used as a reference text on the subject until 1923, when Gilbert Lewis and Merle Randall’s text on chemical thermodynamics appeared, thus founding the Lewis school of thermodynamics. [3] Sackur was instrumental in bringing German chemist Walther Nernst's 1906 heat theorem into the postion of the third law.

Overview
Sackur was born 28 September in Breslau. He studied at the University of Breslau and obtained his doctorate in 1901. After spending two years working with Rudolf Ladenburg in Breslau, he went to London to work under William Ramsay and to Berlin as a pupil of German physical chemist Walther Nernst. In 1905 he obtained his Habilitation at the University of Breslau and in 1911 he became a professor of chemistry there.

In 1910, while a physical chemist at the University of Breslau, Sackur submitted a paper to the Annalen in which he argued for a connection between the “new law of thermodynamics”, i.e. Nernst’s heat theorem, now known as the third law of thermodynamics, and the role played by the quantum constant, i.e. Planck’s constant h, in statistical calculations of entropy. [2] Upon reading this paper, German physicist Max Planck seized on this logic in a move to eliminate the additive constant to the statistical entropy equation.

In 1911, Sackur discovered an expression for the absolute translational entropy of a monoatomic gas. A Dutch high-school student, Hugo Martin Tetrode, obtained the same result at about the same time independently. The resulting Sackur–Tetrode equation rendered entropy as an extensive variable (in contrast to the classical expression, cf. the Gibbs paradox) and expressed the thermodynamically undetermined constant in terms of molecular parameters and Boltzmann's and Planck's constants. This result was of great heuristic value because it suggested the possibility of deriving the thermodynamic quantities of a gas quantum mechanically. At the same time, the Sackur–Tetrode equation offered a convenient means to evaluate the equilibrium constant of gas-phase reactions, thus foreshadowing a unification of quantum theory, thermodynamics, and physical chemistry. [5]

In 1914, Sackur joined German chemist Fritz Haber’s institute in Berlin (the Kaiser-Wilhelm-Institute fur Physikalische und Elektro-Chemie), as the director of a department.

Reaction end
On 17 Dec 1914, Sackur, age 31, while experimenting on a new army shell casing at the institute, died (dereacted) an explosion while mixing two chemicals in a test tube. [4]