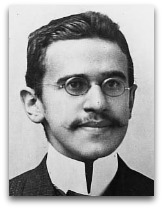 In hmolscience, Otto Weininger (1880-1903) (IQ:155|#560) [RGM:238|1,350+), was an Austrian philosopher noted for his 1903 Eros and Psyche or Sex and Character: A Fundamental Investigation, published four months before he shot himself in the heart (see: founders and suicide), in which he claims to be the first to extrapolate upon German polymath Johann Goethe’s 1809 chemical affinity theory of relationships, passions, sex, marriage and divorce. [1]

Goethe’s protégé Arthur Schopenhauer and his elective affinities based The World as Will and Representation (1814/44), of course, predates Weininger’s publication, but, nevertheless, there is some truth to Weininger’s assertion, as Weininger does seem to present Goethe affinity model as an established scientific fact, and on this fact attempt to outlined a theory of maleness and femaleness in regards to sex and character.

Sexual affinity | Love
The poet William Carlos Williams (1883-1963) (Ѻ) was so impressed by Weininger's ideas that he decided to marry a woman he didn't love, because Weininger argued that sexual affinity, rather than love, formed the true bond between man and woman. (Ѻ)

Education
Weininger studied philosophy at the University of Vienna with Friedrich Jodl (1849-1914), his main mentor, himself a mixture of David Hume, Ludwig Feuerbach, and positivism, and Laurenz Mullner (1848-1911), his second supervisor; physics with Ludwig Boltzmann and Franz Exner (1849-1926); studied certain aspects of medicine and physiology; and worked in the department of plant physiology with Wilhelm Figdor (1866-1938). [7]In 1902, Weininger, then aged 22, completed his PhD dissertation in philosophy; the bulk of which when into forming his 1903 Sex and Character or Eros and Psyche (as it was originally called), the gist of which, as summarized by John Ross (2009), amounts to a "bizarre mixture of science and philosophy" aiming to solve the "Jewish problem" and the "woman problem" in one blow, via some type of spectrum of masculinity and femininity logic applied individually and to social groups. [10]

“The law of sexual affinity is analogous in another respect to a well-known law of theoretical chemistry, although, indeed, there are marked differences. The violence of a chemical reaction is proportionate to the mass of the substances involved, as, or instance, a stronger acid solution unites with a stronger basic solution with greater avidity, just as is the case of the union of a pair of living beings with strong maleness and femaleness.”

This is fairly cogent. Following this, however, he ventures into a life/non-life divide conception:

“But there is a difference between the living process and the reaction of the lifeless chemical substances. The living organism is not homogenous and isotropic in its composition; it is not divisible into a number of small parts of identical properties. The difference depends on the principle of individuality, on the fact that that every living thing is an individual, and that its individuality is essentially structural. And so in the vital process it is not as in inorganic chemistry; and there is no possibility of a larger proportion forming one compound, a smaller proportion forming another.”

Here, Weininger seems to be touching on the the so-called: individuality problem.

Influence
Weininger was influential to those including: Ludwig Wittgenstein and James Joyce. [3]

Weininger's plant physiology professor Wilhelm Figdor (1866-1938), of note, came from the family that Hermann Christian Wittgenstein married into, thereby making a connectivity to a then “young Weininger fan” named Ludwig Wittgenstein, who in 1903, then aged 14, was assumed to have been at Weininger’s funeral, which took place at Matzleinsdorf Protestant Cemetery, pictured below (right). Wittgenstein, e.g., as a youth, read Sex and Character, and was said to have been deeply influenced by it. [2]

Weininger, as noted summarized by John Ross (2009), had “a powerful influence” on Wittgenstein, both examining the same relationships between logic and morality from a psychological point of view; Wittgenstein, of note, continued to think along Weininger lines throughout his days, e.g. mentioning him in his notes as late as 1950. [10]

Chemical | Morality
The following are noted quotes on morality, in the human chemical theory perspective:

“If iron sulphate and caustic potash are brought together, the SO4 ions leave the iron to unite with the potassium. When in nature an adjustment of such differences of potential is about to take place, he who would approve or disapprove of the process form the moral point of view would appear to most to play a ridiculous part.”

Weininger states that this the fundamental idea of Goethe's Elective Affinities, namely that: "a divorce takes place, as much constitutional, depending on the nature of things". He notes:

“None the less, it is as little my intention as it was the intention of Goethe to advocate divorce, but only to explain it.”

Other
It was Friedrich Jodl (1849-1914), to note, who convinced Weininger to change the title of book from Eros and Psyche (original title), seemingly on Algerian-Roman Latin-prose writer Apuleius’ 160AD “Cupid and Psyche”, in his Metamorphosis, to Sex and Character (Geschlecht und Charakter), the latter considered more “scholarly”, in Jodl’s view. [8]

Weininger, to note, sent a copy of his Sex and Character to Sigmund Freud, who belittled it. [10]

Jews | Hitler
Weininger, himself the son of a Jewish goldsmith, supposedly, considered both Jews and woman as soulless. In 1941, Weininger’s name was making the rounds in Adolf Hitler’s circle (Ѻ); Hitler’s mentor Dietrch Eckart, e.g., referring to Weininger as the only decent Jew he had ever made the acquaintance of (Ѻ); Hitler later saying, something to effect of, “there was only one decent Jew, and he killed himself”.

In June 1903, after months of concentrated work, Weininger finish his human chemistry upgrade book Sex and Character: A Fundamental Investigation, an attempt "to place sex relations in a new and decisive light"—namely, it seems, and expansion of Goethe’s human chemical theory applied to feminism and sexual relation issues. Shortly after finishing Sex and Character, Weininger commented the following: [6]

“There are three possibilities for me: the gallows, suicide, or a future so brilliant that I don’t dare to think of it.”

The book, however, did not created the expected “stir”, although at one point it was attacked by German neurologist and Goethe-Schopenhauer-Nietzsche scholar Paul Mobius who accused him of plagiarism. Deeply disappointed, and seemingly depressed, Weininger left for Italy.

Back in Vienna he spent his last five days with his parents. On October 3, he took a room in the house in Schwarzspanierstraße 15, the noted final resting place of Ludwig van Beethoven. He told the landlady that he was not to be disturbed before morning since he planned to work and then to go to bed late. This night he wrote two letters, one addressed to his father, the other one to his brother Richard, telling them that he was going to shoot himself. On October 4, Weininger was found mortally wounded, having shot himself through the heart. He died in Wiener Allgemeines Krankenhaus at half past ten that morning. Otto Weininger was buried in the Matzleinsdorf Protestant Cemetery in Vienna. The epitaph by his father translates:

“This stone closes the resting place of a youth whose spirit never found rest on earth. And when he had made known the revelations of his spirit and of his soul, he could no longer bear to be among the living. He sought out the death precinct of one of the greatest in Vienna's Schwarzspanier house, and there destroyed his bodily existence.”

Quotes | Employed
The following are quotes employed by Weininger:

“Love is a rebellious bird, that no one can tame: And it is in vain that it is called, If he agrees to refuse. Nothing works; threat or prayer: One speaks, the other is silent; And that's the other one I prefer; He did not say anything, but I like him. Love is child of Bohemia, He never knew a law.”

“This book ... is a sensational work, both by reason of its contents and of the tragic fate of its author. Weininger, as is commonly known, shot himself in the autumn of 1903 at the early age of twenty-three, in the house in Vienna where Beethoven had died. . . . But it is the book itself, even more than its author's individuality, which is abnormal. It is nothing less than an attempt to construct a system of sexual characterology on the broadest scientific basis, with all the resources of the most modern philosophy.”

“We have all come under the spell of Otto Weininger, even those of us who have never heard of him, for he was one of those geniuses whose ideas echo far beyond any sound that is made by their names.”

“I think, I have never invented a movement of thought, rather they are always given to me by others. I have merely taken them up passionately for my work of clarification. In this way Boltzmann, Hertz, Schopenhauer, [Gottlob] Frege, Russell, Kraus, Loos, Weininger, Spengler, Sraffa have influenced me.”

“The man came as a meteor and disappeared as suddenly. It was only when he had passed that his ideas started to sparkle, electrifying the world. Some regarded him as a biologist, others as a psychologist, still others called him a mystic. Though generally considered a realist, he was at the same time strongly suspected of dealing in fantasies. He was praised for his invincible logic and attacked for his crusade against women. He was full of contradictions. His name became the signal for dispute and controversy in a thousand cities.”

“Weininger’s nature forced his mind on long expeditions into psychology, biology, literature, and philosophy, journeys from which he never returned. Dissatisfied with scientific research, discontent with his own restless nature, he went farther and farther along the paths of speculative thought until he was, at the end, quite alone.”

“It would be hard to find another man who showed even in mild form the characteristics and the mental processes that Otto Weininger revealed in the extreme.”

“I must confess to being proud that this book is the first work to take up [Goethe’s] ideas.”

“Definite scientific conceptions are preceded by anticipations. The process of clarification is spread over many generations. There were ancient and modern vague anticipations of the theory of Darwin and Lamarck, anticipations which we are now apt to overvalue. Mayer and Helmholtz had their predecessors, and Goethe and Leonardo da Vinci, perhaps two of the most many-sided intellects known to us, anticipated in a vague way many of the conclusions of modern science.”

“There are men of great genius who have shown no special talent in any marked degree; for instance, men like Novalis or Jean Paul (Ѻ) .”

“Universality is the distinguishing mark of genius. There is no such thing as a special genius, a genius for mathematics, or for music, or even for chess, but only a universal genius. The theory of special genius, according to which for instance, it is supposed that a musical genius should be a fool at other subjects, confuses genius with talent. There are many kinds of talent, but only one kind of genius, and that is able to choose any kind of talent and master it.”

“Other men, who do not possess this organic thirst for truth, are always deeply involved in lies and errors, and so do not understand the bitter revolt of great men against the ‘lies of life’.”

“The most terrible chapter in the most comfortless of all the great books that have been written, the chapter on ‘Death and its Relation to the Indestructibility of our Nature’, in Schopenhauer's The World as Will and Idea, is where the permanence of the will to maintain the species is set down as the only real permanence.”