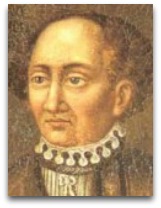 Goethe | Faust
It is know that Goethe, by age 18, had already begun studying Paracelsus (see: Goethe and chemistry). Knowledge of God, for Paracelsus, depended upon knowledge of nature. [7] This Paracelsian logic, or equivalently Spinozian-like logic, would, naturally enough, have attracted Goethe.

Moreover, a number of scholars, e.g. Andrew Weeks (Ѻ), surmise that Goethe drew on Paracelsus as a model for his character Faust, and or that overtime many of the historical attributes of Paracelsus attached themselves to the legend and persona of original Dr. Johann Faust. [7]

Human
Paracelsus, being a devout Christian, albeit who aimed at a physical science reinterpretation, like an early Pierre Teilhard so to speak, held the following views about what constitutes a person: [6]

“Besides the visible body, man has an invisible one. The former comes from the Limbus, the latter is made from the breath of God. As a breath is like nothing in our estimation, likewise this spiritual body is like nothing to our external senses. This invisible body is the one which is spoke of as constituting our corporeal form on the day of the resurrection.”

“Man has two spirits, a divine and a terrestrial spirit. The former is from the breath of God; the latter from the elements of the air and the fire. He ought to live according to the life of the divine spirit and not according to that of the animal.”

Paracelsus also stated his view that he considered Moses to have been a physicist and the Hebrews but ignorant people.

Gas | Coining
The etymology of the word “gas” stems from Paracelsus’ used of the word khaos, in the occult sense of "proper elements of spirits" or "ultra-rarified water". [4]

Life | Fire
On the topic of life, Paracelsus equated fire and life, in the logic that fire is life, and that whatever secrets fire truly bears the seed of life. [2]

Sulphur | Terra Pinguis → Phlogiston → Caloric → Entropy
In 1524, Paracelsus adopted Aristotle’s four element theory, but reasoned that they appeared in bodies as Geber’s three principles. Paracelsus saw these principles as fundamental, and justified them by recourse to the description of how wood burns in fire. Mercury included the cohesive principle, so that when it left in smoke the wood fell apart. Smoke represented the volatility (the mercury principle), the heat-giving flames represented flammability (sulphur), and the remnant ash represented solidity (salt). [3]

In 1669, German physician and chemist Johann Becher updated Paracelsus’ sulphur model of how things burn with a terra pinguis model of combustion, wherein terra pinguis was considered as the fatty, oily material substance of bodies that gives things the property of combustion.

Quotes | On
The following are quotes about Paracelsus:

“The writings of Paracelsus are especially distinguished by the short and concise manner in which his thoughts are expressed. In this regard they may be compared to some of the writings of Thales, Heraclitus, Pythagoras, Anaxagoras, and Hippocrates. There is no ambiguity in his expressions, and if we follow the roads which he indicated, progressing at the same time along the path of physical science, we shall find the richest of treasures buried at the places that he pointed out with his magic wand.”

— Franz Hartmann (1896), The Life and the Doctrines of Paracelsus