In economics, Pareto principle, also known as the “80-20 rule” or “Pareto’s natural law of wealth”, refers to the phenomena that about 80 percent of a country’s wealth tends to be held in about 20 percent of the population. [1]

Formulation
The Pareto principle, according to Jaroslav Sestak, asserts that the statistical character of wealth in a stable economy is modeled by the following power law distribution: [9]

where y is the number of people having an income x or greater than x and a is an exponent that was estimated to be 1.5 applicable to various conditions and nations.

Etymology
The principle is named after French-Italian mathematical engineer and economist Vilfredo Pareto, who first discussed the phenomenon in his 1897 Course of Political Economics. [7]

“The curve of the distribution of wealth in our society, varies little from one era to another. What is called social pyramid is in reality a sort of spinning top, which the following figure gives an idea: 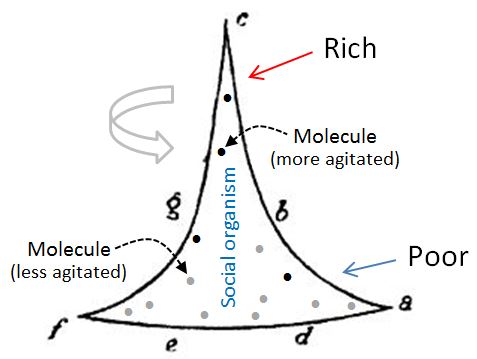 Rich occupying the summit, the poor are at the base. Abcgf the part of the curve we are only well known, thanks to the statistical data. The adef part is only speculative. We have adopted the form indicated by Otto Ammon and which seems to us quite likely that the shape of the curve is not due to chance. It probably depends on the distribution of the physiological and psychological characteristics of men. Moreover, can, in part, relate to the theories of pure economics, that is to say, the choice of men (these choices are specifically related to the physiological and psychological characteristics) and the obstacles encountered in production.

Assuming men arranged in layers according to their wealth, figure abcgfed is the outer form of the social organism. From what we have said this form does not change much, it can be assumed nearly constant on average and for a short time. But the molecules that make up the social aggregate do not remain at rest; individuals get richer, others poorer. So quite extensive are the agitated movements within the social organism, which resembles, in this, a living organism. In the latter, the blood flow is rapidly moving some molecules, the absorption and secretion processes continually change the molecules composing the tissue, while the external shape of the body, such as an adult animal, feels only insignificant changes.

Assuming men arranged in layers according to other characters, such as their intelligence, their ability to study mathematics, their musical talent, poetic, literary, their moral character, etc., it is likely to have curves forms more or less similar to what we just found for the distribution of wealth.”

In 1906, Pareto observed that 80% of the land in Italy was owned by 20% of the population; Pareto is said to have developed or arrived at the principle by observing that 20% of the pea pods in his garden contained or harvested 80% of the peas. [5] In the 1940s, Romanian-born American business-management consultant and engineer Joseph Juran suggested the principle and named it after Pareto, whose work he had become acquainted with during a 1941 visit to General Motors Headquarters. [4]

Thermodynamics
In 2007, American physicist Mark Buchanan discusses the Pareto principle in the context of thermodynamics and his social atom theory. [1]

In 2008, American electrochemical engineer Libb Thims discussed the 1980s “lazy ant study”, which found that ants can be divided into two categories: one consisting of hard workers, the other of inactive or ‘lazy’ ants, and that if the “system” is shattered by separating the two groups from one another, each in turn developed its own subgroups of hard workers and idlers—in other words, a significant percentage of the ‘lazy’ ants suddenly turned into hard working ants—in terms of the mechanical equivalent of heat and the Pareto principle. [2]

In 2011, American chemical engineer James Ferri oversaw a biomolecular engineering student produced video on the Pareto principle in the context of thermodynamics. [3]