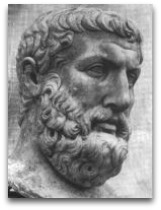 Parmenides' famous "denial of the void" erupted into what would become a 2,000-year heated and intricate debate, with views going back and forth on the matter, as to whether or not voids or vacuums can or cannot or do or do not exist. The first to object to Parmenides' denial was Leucippus who invented the now-famous atomic theory, which was stimulated into conception to purposely contradict Parmenides; the short version of Leucippus' theory being that the postulate that everything in the universe is either atoms or voids.

Next, Plato found the the idea of a vacuum inconceivable. After Plato, Aristotle, student of Plato, declaring the famous dictum horror vacui or “nature abhors a vacuum”, on the logic that in a complete vacuum (see also: perfect vacuum) infinite speed would be possible because motion would encounter no resistance, hence if infinite speed was impossible, so to is a vacuum.

In circa 1648, German engineer Otto Guericke began to devote a considerable portion of his spare time to experimentation and was especially fascinated with the nature of cold, much of which was centered on the question of the void: [2]

“Could empty space exist, and is heavenly space unbounded?”

In researching this query, he was brought into contact with German mathematical physicist Gaspar Schott, an adherent to Aristotle’s version of the denial of the void, albeit open to new experimental information, and ultimately and to French scientist philosopher Rene Descartes’ adherence to the “denial of the vacuum” dictum. This puzzle intrigued Guericke and he went to work trying to evacuate the air form a well-caulked beer keg (adjacent), which introduced him to the sealing problem, i.e. how to make a container air tight. After solving the sealing problem, Guericke was said to have discovered the phenomenon of the compressibility of air after which he invented a vacuum pump.

Schott recorded, diagrammed, and documented all of the Guericke's experimental results, which he appended to his own massive book The Mechanics of Gas Hydraulics.

In 1854, Guericke built the Magdeburg hemispheres to publicly prove that vacuums can exist in nature. Investigations of this same question, by others, led to the development of the thermometer, the steam engine, and eventually the science of thermodynamics, among others.

Quotes | On
The following are quoted by Popper:

“Parmenides’ theory may be described as the first hypothetico-deductive theory of the world. The atomists took it as such; and they asserted that it was refined by experience, since motion does exist. Accepting the formal validity of Parmenides’ argument, they inferred from the falsity of his conclusion the falsity of his premise. But this meant that the nothing — the void, or empty space — existed. Consequently, there was now no need to assume that ‘what is’ — the full, that which fills some space — had no parts; for its parts could now be separated by the void.”

“Being is unbegotten, indestructible, whole, eternally one, immovable and infinite. With it there is no was nor shall be; the whole is forever now, one and continuous.”