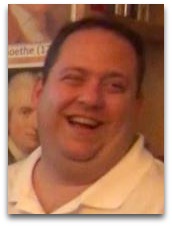 In existographies, Patrick Fergus (1985-2015) (DN:9.5) (CR:26), aka "Pat" or "King Atheist", was an American atheist and realist noted for being the co-host, with American extreme atheist and electrochemical engineer Libb Thims, of the 2014-launched YouTube channel Atheism Reviews. [1]

Thompson | Kesey
Fergus’ favorite author was American writer, journalist, and realist Hunter Thompson (1937-2005). The following is the most-liked quote of Thompson’s Fear and Loathing in Las Vegas, his most-famous book, according to GoodReads: [3]

“No sympathy for the devil; keep that in mind. Buy the ticket, take the ride ... and if it occasionally gets a little heavier than what you had in mind, well ... maybe chalk it off to forced conscious expansion: Tune in, freak out, get beaten ... it’s all in Kesey’s Bible .… the far side of reality.”

The mention of “Kesey’s Bible” here refers to American One Flew Over the Cuckkoo’s Nest author Ken Kesey (1935-2001) and his 1971 The Realist article “The Bible”, and it's philosophical discourse on the paradoxical nature of work; few representative quotes: [6]

“Man’s theories about himself will build up, like tartar on a tooth, until something breaks the shell or until he succumbs to the twilight security of an armored blind mind.”

“This task of revolution turned to with conscious purpose ten years ago has demanded nothing less than full time effort of everyone aware of the job to be done. No one has f*cked off—laid back, maybe, or f*cked up, but not really f*cked off—because the person who can still take a vacation has never gone to work—and very few have defected back to their former jobs. Who wants to take a train back and forth every day from one schizophrenic life to the other?”

Energy philosophy | Atheist's creed
Fergus was a passionate hard-core atheist, even being an “evangelical atheist” of sorts with most people he came in contact with, particularly if you began to hang out with him and or interact with him. The following is what Fergus believed in, i.e. his atheist’s creed so to say:

“Energy. You have sex, there’s friction … that’s heat. Then a baby shoots out. It’s all energy. The sun's a giant orgasm. Like if you see a hot girl ... and she's soo hot, you can't even touch that sh*t. You're like daaammn!”

In respect to where he derived this “belief”, his favorite author was American writer Hunter Thompson (1937-2005), best-known for his 1971 book turned (1998) film Fear and Loathing in Las Vegas, which was Fergus’ favorite film, behind Wolf of Wall Street (2014). [2] The following are notably representative “energy” structured Thompson quotes:

“All energy flows according to the whims of the great magnet. What a fool I was to defy him.”

“History is hard to know, because of all the hired bullsh*t, but even without being sure of 'history' it seems entirely reasonable to think that every now and then the energy of a whole generation comes to a head in a long fine flash, for reasons that nobody really understands at the time—and which never explain, in retrospect, what actually happened . . . There was madness in any direction, at any hour. If not across the Bay, then up the Golden Gate or down 101 to Los Altos or La Honda . . . You could strike sparks anywhere. There was a fantastic universal sense that whatever we were doing was right, that we were winning . . . And that, I think, was the handle—that sense of inevitable victory over the forces of Old and Evil. Not in any mean or military sense; we didn't need that. Our energy would simply prevail. There was no point in fighting—on our side or theirs. We had all the momentum; we were riding the crest of a high and beautiful wave . . . So now, less than five years later, you can go up on a steep hill in Las Vegas and look West, and with the right kind of eyes you can almost see the high-water mark—that place where the wave finally broke and rolled back.”

Religion | Upbringing
Fergus was raised Irish Catholic, his father being an Irish Catholic Christian, his mother being denominationally a theist, but teetering on atheism, as Pat speculated in 2014. At age 10, Fergus irreverence and disdain for religion was prominent, as evidenced by the fact that him and his friend Chris burned ten of one of their Jewish friend's yarmulkes in a fire, for a laugh. At age of about 15, Fergus became an atheist, as one of his Jewish friends recollect things, as told to Libb Thims, when queried about when Fergus became atheist; which seems to corroborate with episode commentary where he "by that age" told to his parents [or father] “I’m not stepping foot in another church.” The following Thompson quote seem to capture aspects of Fergus’ mindset:

“This is the same cruel and paradoxically benevolent bullsh*t that has kept the Catholic Church going for so many centuries. It is also the military ethic … a blind faith in some higher and wiser ‘authority.’ The Pope, The General, The Prime Minister … all the way up to ‘god’.”

— Pat Fergus (2014), laughing response after explained by Libb Thims that life does not exist and is a religious concept

Atheism Reviews
In 2014, Libb Thims, in the wake of the Beg-Thims dialogue, in particular Mirza Beg's admittance that he believes in flying horses, approached Fergus, who had been talking with Thims about atheism, nearly daily since the met, about doing a YouTube atheism channel.

Thims told Fergus that his shown nickname was going to be “King Atheist”, per the reasons:

(a) atheism is all he ever talks about, particularly when he's drinking with his friends
(b) he’s always trying to convert his spiritual and religious friends to atheism, by ripping on the idiocy of their belief system, sometimes staying up all night, till the crack of dawn, to do so
(c) owing to the fact that he has a Jewish friend, that drives him around to parties and bar-hopping, whom he always refers to in the third person as “King Jew”, whereby, accordingly, Thims told Pat: “just as you call what’s-his-name ‘King Jew’, we have to call you ‘King Atheist’!”

The "crown" symbols to all the thumbs of all Atheism Reviews episodes wherein King Atheist is co-host, per his debut interjection "heavy wears the crown" gesture. [4]

The following are noted show quotes and or show-related quotes:

— Pat Fergus (2014), response statement when Libb Thims told Pat that he was conducting a “What is the Soul Comprised of?” polling of 36 people; also picked as most-liked answer by vote, Sep 28 [5]

“God can never be dead, because he’s never existed.”

“…. and then a cockroach fell outta the toilet.”

“Ashes to ashes, dust to dust.”

— Pat Fergus (2014/15), response to query: “What’s the most truthful thing in the Bible?” | Note: historically, this is a mixture of Plato's first law of affinity and the clay creation myth

Reaction end
Fergus met his reaction end on Wednesday 21 Jan 2015, while on vacation in Thailand, after a long night of partying no-doubt like a rock star themed Hunter Thompson, in Cambodia, at the age of 29. The following Thompson quote seems to capture Fergus’ out:

“We must ride this strange torpedo out until the end.”

“There he goes. One of god's own prototypes. A high-powered mutant of some kind never even considered for mass production. Too weird to live, and too rare to die.”

“You took too much man, too much, too much.”

“Old elephants limp off to the hills to die; old Americans go out to the highway and drive themselves to death with huge cars.”

“Get the ludes. I’m not gonna die sober!”

In short, the days before he left he was bragging, to Thims, how is friend Fernando said "I'd better go have a drink with you, because this might be the last time I see you!" He had already made out his last will and testament with his lawyer friend, from high school, who resides down the block from Thims; talking endlessly about how he wanted to be fed to the sharks when he's gone, etc.. The last movie he wanted to watch in Chicago before going away was Full Metal Jacket (1987), during which he was real intense related to Thims and Art the god believer, who was there, how he related to the lead character in the film.