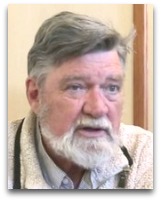 Eliminative materialism
In 1981, Churchland, in his “Eliminative Materialism and the Propositional Attitudes”, stated, in advocation of "eliminative materialism", that the traditional roadblocks to the so-called materialist program, namely emotions, qualia, and raw feelings, were beginning to dissolve as compared to previous decades, and went on to argue that neuroscience needs to be more substantially integrated into physical science. [1]

Other
Churchland, of note, is married to Canadian-born American philosopher Patricia Churchland, author of the provocative 1986 Neurophilosophy, which advocates the eliminative materialism positions, suggesting that developments in neuroscience point to a bleak future for commonsense mental states. [2]

Quotes | By
The following are quotes by Churchland: