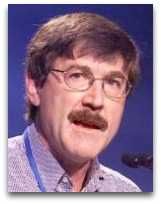 In hmolscience, Paul Davies (1946-) is a English physicist noted for his 1960s-present effort to understand how a physical system, looked at from the point of view of Australian physicist Brandon Carter's "anthropic principle", can make a transition from a nonliving state to a living state, for his circa 1983 gravity-derived "entropy gap" theory of the origin of life, and for his 1990s to 2000s publications a number of origin of life themed books structured around explaining life in terms of the second law. An oft-cited quoted by Davies, from his 2003 “Was Life on Earth Born Lucky?” New Scientist article, is the following:

“Nobody knows how a mixture of lifeless chemicals spontaneously organised themselves into the first living cell.”

The quote forms the basis of question number one (how did life originate?) of the semi-notorious 2011 “15 Questions for Evolutionists” pamphlet sold by Creation.com, written by Don Batten. [13]

Among others, including: Last Three Minutes (1997), About Time (1996), The Cosmic Blueprint (1987), Are We Alone? Philosophical Implications of the Discovery of Extraterrestrial Life (1995), Superforce: the Search for a Grand Unified Theory of Nature (1984), numerous others (Ѻ), one of note being his 2006 The Goldilocks Enigma: Why Is the Universe Just Right for Life?, pictured adjacent, in which he argues that the earth, with its so-called "bio-friendly" conditions habitable zone, was fine-tuned by accident, and found in one of many universes.

What is life? | Living cloud?

Davies states that his interest in understanding the question of what exactly is life began to take hold as an undergraduate physics student in the mid 1960s when he read English astronomer Fred Hoyle’s 1957 science fiction novel The Black Cloud, in which a large cloud of gas from interstellar space arrived in the solar system, which was said to be ‘alive’. Davies was intrigued by this idea, in his own retrospect words: [1]

Hoyle’s living cloud left Davies ‘baffled and vaguely disturbed’, leaving him questioning the ‘what exactly is life question’ and ‘when did it start?’ issue.

Likewise, as described in Hoyle's autobiography Home Is Where the Wind Blows: Chapters from a Cosmologist's Life, Wolfgang Pauli later told Hoyle that he discussed the philosophical implications of the novel with Carl Jung and thought the novel was "better than your astronomical work."

Next, Davies’ PhD advisor (Michael Seaton or Sigurd Zienau) then gave him a copy of Hungarian-American physicist Eugene Wigner’s 1961 essay “The Probability of the Existence of a Self-Reproducing Unit” which purported to prove that a physical system can not make a transition from a nonliving state to a living state without contravening the laws of quantum physics, arguing to the effect, according to Davies, that ‘something funny must have gone on when life started.’ [7]

Davies supervisor then passed him Australian astrophysicist Brandon Carter’s circa 1970 paper on the ‘anthropic principle’ (a term he coined), which argues to affect that the laws of nuclear physics are fine-tuned to make carbon in stars, and hence predisposed to the development of life, and hence anthropocentric laws are made to favor the development of human life, in short. Davies then worked under Hoyle and with Carter for two years at Cambridge, from 1970 to 1972. During this period he chanced across a copy of Erwin Schrodinger’s famous 1944 booklet What is Life?, as we all have, which gave Davies the view that biological organisms can be explained by physics. This seems to have been Davies first indoctrination into the basics of the thermodynamics of life and his later circa 1980s gravitational entropy theory of life. In 1999, Davies, in fact, declared the second law to the "ultimate problem of biogenesis".

In his 2003 The Origin of Life, Davies attempts to answer the question: [8]

“Is life written into the laws of nature, or just a bizarre accident, unique in the universe? How can a mix of non-living chemicals be transformed into something as complex as the living cell?

He begins this book, by spending a considerable portion of the start detailing the second law of thermodynamics and the oft-mentioned misconception that the origin of complex organized systems infringes this law, in which he argues, supposedly, that such events occur in a closed system, but not in the case of open systems.

Panspermia
Davies was one of the early promoters of the mars-derived origin of life theory, namely that life on earth may have originated from bacteria that was formed on other planets many ages ago, impacting on the earth. This leads to the view that life predates the formation of the earth, meaning that organisms may have propagated from star system to star system, ferried on asteroids, across the universe, which reduces the question of whether life had a beginning (in the mind of Davies) to a question of whether the universe had a beginning. He started working on his "micro-organisms traveling between mars and earth" theory in the 1990s after becoming interested in the work of Duncan Steel, who theorized that asteroids could be ejected from planets by cosmic collisions.

The 1996 discovery of the ancient Mars-derived meteorite, said to contain possible fossilized bacteria, seems to have been a goad that led Davies to pen his 1999 book The Fifth Miracle: the Search for the Origin and Meaning of Life.

In his 2008 chapter “A Quantum Origin of Life”, Davies argues that modern topics quantum mechanics, namely coherent wavelike nature of matter, tunneling, entanglement, intrinsic spin, Berry phase, environmental post-selection, and the watchdog effect, may soon solve the riddle of the “living state of matter” and the origin of life question. [6]

Entropy gap theory
Davies' first book, the 1974 The Physics of Time Asymmetry, is an exposition on time, thermodynamics, statistical mechanics, reversibility, reversibility objections, thermodynamics and cosmology, with end chapters on electromagnetic and quantum mechanics. In this book, Davies discusses Ludwig Boltzmann’s 1878 H-theorem, objections to Boltzmann’s theory by those as Josef Loschmidt and Ernst Zermelo, Arthur Eddington’s 1928 entropy arrow of time, along with the posthumous 1956 book The Direction of Time by German-born American science philosopher Hans Reichenbach, who theorized about ‘branch systems’ that separate off from the main environment in a low entropy state. [11] Davies continued with his theorizing on entropy and the movement of the universe in his 1978 The Runaway Universe. [10]

Sometime in the 1980s, Davies began to develop a gravity-driven entropy reversal theory of life, his central argument somehow crouched in the idea that "time reverses with each cosmic bounce." [9]

In his 1983 book God and the New Physics, Davies seems to clearly dig into his gravity-driven entropy-order theory. [2] Yet, according to American physician David Alkek, somewhere in his three books The Cosmic Blueprint (1988), The Mind of God (1992), and The Last Three Minutes (1997), Davies outlines ideas on self-development, growth of organized complexity, mixed together with discussions on “reverse entropy” (or entropy reversal). In his The Mind of God, he discusses life in terms of gravity and entropy and the human brain. [4] In his 1999 origin and meaning of life book The 5th Miracle, Davies devotes the second chapter to thermodynamics, concluding that:

“All life feeds off the entropy gap that gravitation has created. The ultimate source of biological information and order is gravitation.”

A notable aspect of Davies's work is that he bases many of his arguments on the relatively unknown 1930s work of American chemical engineer and theoretical cosmologist Richard Tolman who found that as the entropy of the universe rises, so to do the cycles grow bigger and bigger and last longer and longer. [3]

Difficulties on theory
An obvious sore thumb in Davies' theory, is that much of his discussions are intertwined with American electrical engineer Claude Shannon's 1948 "information entropy" theory of communication, which is a way to quantify 1s and 0s in telegraph wires, but a theory that has nothing to do with entropy or thermodynamics.

Religion
Davies ambivalently open to the possibility that the universe is anthropocentric and that god may exist. This is evidenced by the fact that Davies is often cited by thinkers in the religious community and in religious thermodynamics themed articles and books, and his noted mentions of Genesis and god, leads to the conclusion that he has some underlying belief in the existence of god.

Davies states that he grew up in a family where his incessant questions about the why’s of everything, were typically answered with “because God made it that way, and that’s that!” In this book, he seems to give the view that he is agnostic, but open to the possibility that intelligent design may operate in the universe. To note, his exact adulthood views, e.g. Dawkins number, on the existence of god, seem to be unstated.

Education
Davies completed his BS in physics at in 1967 and his PhD in 1970, with a thesis on “Contributions to Theoretical Physics: (i) Radiation Damping in the Optical Continuum (ii) A Quantum Theory of Wheeler-Feynman Electrodynamics”, both at the University College London. He then worked for two years under Fred Hoyle at the University of Cambridge, after which he became a professor at Kings College (1972-1980), University of Newcastle upon Tyne (1980-1990), University of Adelaide (1993-1997), then a visiting professor at a number of universities, and since 2006 has been at the Arizona State University, as head of the Beyond Center, which focuses on quantum mechanics, early universe questions, gravity, black hole thermodynamics, time (arrow of time), origin of life, and extraterrestrial life. [5]