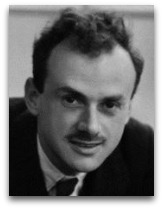 In existographies, Paul Dirac (1902-1984) (IQ:190|#32) [RGM:311|1,500+] (Murray 4000:15|P) [GPE:#] (DN:7) (CR:129) was an English theoretical physicist, ranked as a greatest physicist every, especially in particle physics, noted for his 1927 work in developing a relativistic + quantum mechanics based description of the motion of the electron, which predicted the existence of antimatter or negative energy states of the electron and included electron spin.

In 1929, mid August, Werner Heisenberg and Paul Dirac, after each had given a series of lectures in Robert Oppenheimer’s department at the University of California, Berkeley, set off from San Francisco on a two-week cruise to Japan, during which time Heisenberg was “conventionally hedonistic”, as Graham Farmelo reports, likely partying and dancing with the flapper girls. Heisenberg long remembers Dirac looking on quizzically and asking: [3]

Compare this to William Rankine's circa 1845 "The Mathematician in Love" poem (section IV).

Anti-particles | Negative energy states
In 1928, Dirac derived a relativistic wave equation for the electron, using both quantum mechanics and relativity, which predicted the existence of antimatter.

In 1932, Ettore Majorana wrote in unpublished paper, he kept in a drawer for five years, that qualifies some aspects of Dirac’s well-known thesis on anti-particles, which continues to be (even today) a work of reference.

“The underlying physical laws necessary for the mathematical theory of a large part of physics and the whole of chemistry are thus completely known, and the difficulty is only that the exact application of these laws leads to equations much too complicated to be soluble. It therefore becomes desirable that approximate practical methods of applying quantum mechanics should be developed, which can lead to an explanation of the main features of complex atomic systems without too much computation.”

These words, according to Dirac biographer Graham Farmelo, to have become one of the clarion calls of reductionists—according to which, for instance, “extreme reductionism” would thus explain “why a dog barks” via quantum mechanics. [2]

In 1927, at the fifth Solvay Conference in Brussels, while sitting around one evening at the hotel’s smoky lounge, some of the younger physicists were sitting around on chairs and sofas, among them Dirac, Werner Heisenberg, and Wolfgang Pauli, during the course of which, as recalled by Heisenberg, Dirac went off on rant about religion, triggered by a comment about Einstein’s habit of referring to God during discussions of fundamental physics: [3]

“If we are honest — and scientists have to be — we must admit that religion is a jumble of false assertions, with no basis in reality. The very idea of God is a product of the human imagination. It is quite understandable why primitive people, who were so much more exposed to the overpowering forces of nature than we are today, should have personified these forces in fear and trembling. But nowadays, when we understand so many natural processes, we have no need for such solutions. I can't for the life of me see how the postulate of an Almighty God helps us in any way. What I do see is that this assumption leads to such unproductive questions as why God allows so much misery and injustice, the exploitation of the poor by the rich and all the other horrors He might have prevented. If religion is still being taught, it is by no means because its ideas still convince us, but simply because some of us want to keep the lower classes quiet. Quiet people are much easier to govern than clamorous and dissatisfied ones. They are also much easier to exploit. Religion is a kind of opium that allows a nation to lull itself into wishful dreams and so forget the injustices that are being perpetrated against the people. Hence the close alliance between those two great political forces, the State and the Church. Both need the illusion that a kindly God rewards — in heaven if not on earth — all those who have not risen up against injustice, who have done their duty quietly and uncomplainingly. That is precisely why the honest assertion that God is a mere product of the human imagination is branded as the worst of all mortal sins.”

At the end of which Pauli, when asked what he thought, declared: [2]

“Well our friend Dirac, too, has a religion, and its guiding principle: There is no God and Dirac is his prophet.”

after which everyone laughed, including Dirac. The following, likewise, is an unpublished 1933 handwritten note by Dirac: [5]

“Any further assumption implied by belief in a God which one may have in one’s faith is inadmissible from the point of view of modern science, and should not be needed in a well-organized society.”

which, to note, is near verbatim to the famous 1802 "I had no need of that hypothesis" Napoleon Laplace anecdote on Pierre Laplace's god-free celestial mechanics.

Quotes | On
The following are quotes on Dirac:

“I don’t know what the fuss is all about—Dirac did it all before me.”

Quotes | By
The following are quotes by Dirac