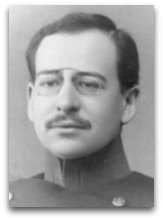 In thermodynamics, Paul Epstein (1883-1966) was a Russian-born American mathematical physicist and fifth generation thermodynamicist noted for his 1937 Textbook of Thermodynamics, written for the point of view and application of the physicist. [1]

Education
Epstein completed his undergraduate work in mathematics and physics at the Imperial University of Moscow in 1905 and completed his PhD, under Arnold Sommerfeld, on a problem of the theory of diffraction of electromagnetic waves at the Technical University of Munich in 1914. He began teaching at the California Institute of Physics in 1921 and was a professor of theoretical physics there by 1937. His studies and research interest were on theoretical physics, with emphasis on thermodynamics and quantum theory. [2]

“What I did was, first, I tried to read advanced physics, and I got Maxwell’s treatise on electricity and magnetism, which is one of the great fundamental books, and I worked hard on it. I could not read it, but it was a concept of mathematics that I did not know—partial differential equations, they didn’t have anything like that. I had to give it up finally. The other book which I took was Planck’s Thermodynamics. Planck was a pretty famous man in those days, a German professor in Berlin. Later I had classes, relations with him. I could read the book, but I found it excruciatingly dull. That is one of the reasons I myself wrote a book on thermodynamics, and I think I did it better.”

— Paul Epstein (1966), Interview reflections on what, as a Russian college student, he studied since he didn’t attend lectures most of the time” [2]