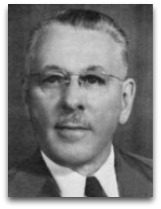 In hmolscience, Paul Darwin Foote (1888-1971) was an American physicist noted, in religious thermodynamics, for his circa 1920 thermodynamics humor stylized article “The Temperature of Heaven and Hell” (see: thermodynamics of hell), wherein he used Boyle’s law to talk about souls and heat.

Overview
In circa 1920, Foote published an anonymous article entitled “The Temperature of Heaven and Hell”, published in the Taylor Instrument Company house organ, in which he attempt to present a half-serious, half-humorous, proof that souls have mass, which can be treated as gas particles, whereby using Boyle’s law, in conjunction with the rates at which people come and go (die), one can argue that the temperature of hell depends on the expansion rate of the volume of hell, which is, in turn, based on the rate at which souls are entering hell.

Foote, supposedly, commented to the effect that: [2]

“First, we postulate that if souls exist, then they must have some mass. If they do, then a mole of souls can also have mass. So, at what rate are souls moving into hell and at what rate are souls leaving? I think that we can safely assume that once a soul gets to hell, it will not leave. Therefore, no souls are leaving. As for souls entering hell, let’s look at the different religions that exist in the world today. Some of these religions state that if you are not a member of their religion, you will go to hell. Since there are more than one of these religions and people do not belong to more than one religion, we can project that all people and all souls go to hell. With birth and death rates as they are, we can expect the number of souls in hell to increase exponentially. Now, we look at the rate of change in volume in hell. Boyle’s law states that in order for the temperature and pressure in hell to stay the same, the ratio of the mass of souls and volume needs to stay constant. So, if hell is expanding at a slower rate than the rate at which souls enter hell, then the temperature and pressure in hell increase until all hell breaks loose. Of course, if hell is expanding at a rate faster than the increase of souls in hell, then the temperature and pressure will drop until hell freezes over.”

The article was reprinted in various journals in the decades to follow and is the seed of the now many variations on the thermodynamics of hell exam questions given out to chemistry students.

Education
Foote completed his undergraduate work in 1909 at Adelbert College, Western Reserve University, in mathematics and physics. He then spent two years at the University of Nebraska, completing a MS in 1912, under C. A. Skinner, with a thesis on the magnetic rotation of the plane of polarization and ellipticity of plane polarized light reflected from mirrors in a magnetic field. He then began working at the Bureau of Standards and based on the joint work of graduate courses taken in Washington, D.C. and Bureau of Standards work was awarded a PhD in physics in 1917 by the University of Minnesota. [1]