Overview
In 1809, Goethe, in his Elective Affinities, via his implicit human chemical theory, discussed, via dialogue, between the three main characters: Charlotte, Eduard, and the Captain, the premise that humans defined as chemicals, evolved or "metamorphosized" over time. 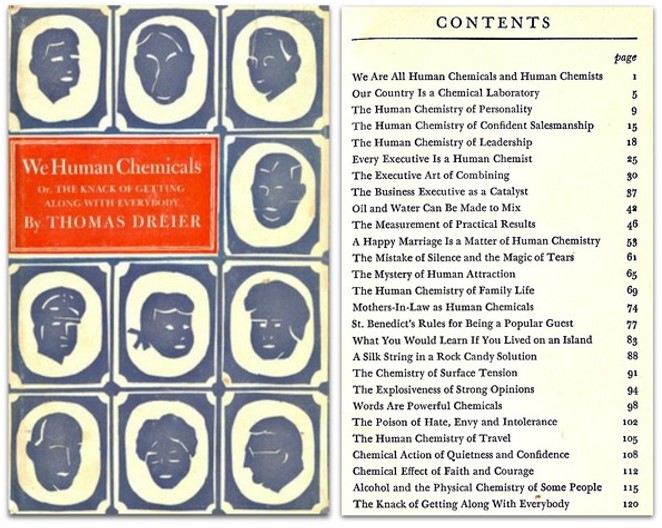 wherein he argued that humans are “chemicals” (or human chemicals as he referred to people) and managers are “human chemists”. [1]

In 2013, Kirth Gerson, in his “Breaking Bad Pilot: People are Chemicals, Too!” class video lecture, analyzed Breaking Bad as a type of each human is an element (or chemical) reacting in a social system that makes chemicals, a sort of modern Elective Affinities analysis, so to say. [4]

The actual plot of the story, however, does not seem to have originated as a "humans as chemicals" type of show, but rather as after production decoration. [5]

“People separate and aggregate like oil, water, and wine.”

“People react—attract and repel each other, reunite, neutralize each other, separate again and recover—like chemicals on an affinity table.”

“The very man who, with a chemical experiment as his informing anecdote, or point of departure, might tell you that people are but chemicals, will induce responses in people by talking to them, whereas he would not try to make chemicals behave by linguistic inducement. And to say that people are ‘chemicals that talk’ is the same thing as saying that people aren’t ‘just chemicals’ since chemicals don’t talk. It is to confront the paradox of substance in a terminology unsuited to the illumination of this paradox. Conversely, the notion of chemical affinity about which Goethe organizes his novel of sorrowing love, Die Wahlverwandtschaften, is not really the chemicalizing of human substance, but rather the humanizing of chemical substance. For the motive is define by the action of the characters in a way totally unrepresentative of chemicals; and the situation is not chemical, but social. Nothing makes this more quickly apparent than the closing paragraph, where the dead lovers like buried side by side, surely their nearest approach to a chemical condition.”

“People are chemicals that react—form bonds, break bonds, go through transformation processes—according to the rules dictated by the logic of changes of bound states of existence, quantified by the calculated methods of free energy tables.”