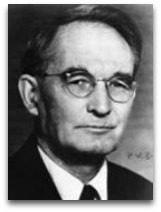 In thermodynamics, Percy Bridgman (1882-1961) (IQ:185|#53) (CR:65|#75), oft-cited as P.W. Bridgman, was an American physicist noted for 1914 Bridgman formulas, a systematic way of deriving the main 720-equations of thermodynamics by taking the first derivatives of the 10 fundamental quantities, operationalism model of meaning (1926), his 1941 The Nature of Thermodynamics, the 1946 Bridgman paradox, on the seeming impossibility of calculating the entropy of a living organism (powered CHNOPS+ system), and for his involvement in the Princeton Department of Social Physics.

Operationalism | Meaning
In 1927, Bridgman, in his The Logic of Modern Physics, outlined his so-named “operationalism” doctrine, which asserts that one does not know the meaning of a concept unless one has a method of measuring it; the following supposedly is the core tenet of the model: (Ѻ)

The following is a popularly quoted statement of operationalism applied to the humanities:

“If a specific question has meaning, it must be possible to find operations by which an answer may be given to it ... I believe that many of the questions asked about social and philosophical subjects will be found to be meaningless when examined from the point of view of operations.”

In 1940, Russian-born American sociologist Pitirim Sorokin seems to have classified Bridgman’s 1938 The Intelligent Individual as the latest product of the mechanistic school, following Vilfredo Pareto, as something swamped with a similar maze of blunders and inconsistencies: [12]

“The fault is not, however, Lundberg’s. It is the fault of the way and method he chose. Anybody who has done that, from all the representatives of the Mechanistic School up to Pareto and P.W. Bridgman (in his The Intelligent Individual and Society) similarly were swamped in a similar maze of blunders and inconsistencies.”

Interestingly, all of these vehement objection, seen here, as Sorokin would finally latter admit, letting the cat out of the bag, so to say, in the 1950s, via his The Ways and Power of Love (1954) book and “The Mysterious Energy of Love” (1959) talk, seems to have been but a religious conflict with Sorokin.

French-born American physicist Leon Brillouin states Bridgman was at the 1946 "what is life: in terms of physics and chemistry?" debate at Harvard, where at, supposedly, during the discussion, Bridgman commented how he saw a fundamental difficulty in the possibility of applying the laws of thermodynamics to any system containing living organisms (chnopsological organisms). Brillouin summarizes Bridgman's views as follows: [6]

“How can we compute or even evaluate the entropy of a living being? In order to compute the entropy of a system, it is necessary to be able to create or to destroy it in a reversible way. We can think of no reversible process by which a living organism can be created or killed: both birth and death are irreversible processes. There is absolutely no way to define the change of entropy that takes place in an organism at the moment of death.”

Brillouin defined this as the so-called "paradox of Bridgman" or Bridgman's paradox, as we have truncated it here. Compare also Martin Goldstein's 1993 entropy of a mouse chapter subsection.

The original transcripts, of the debate, if they exist, remain to be tracked down.

Bridgman is also noted for his 1914 clean and organized way of deriving thermodynamic expressions from the partial derivatives of the eight main thermodynamic variables, P, V, T, E, H, S, A, and F (see: symbols), of which there are 8 x 7 x 6 first (partial) derivatives. Bridgman devised a system that allows for the derivation of any of these first partial derivatives in terms of three quantities which are, in general, capable of experimental determination, namely (∂V/∂T)P, (∂V/∂P)T, and (∂H/∂T)P, i.e. CP. The twenty-eight essential formulas derived using this methodology are show adjacent. [3]

Praise
In 1914, American chemist Theodore Richards commented on Bridgman in a 1915 letter of recommendation that: [2]

“Bridgman … only 33 years old, although a slight and insignificant looking person, has dealt with the greatest pressures every studied carefully by physicists. His mind seems to be rather of the one-track type. His work with these high pressures is epoch making in my opinion … he seems to be a very expert mathematician, with a solid and deep knowledge of thermodynamics.”

Bridgman was an attendee of the 1923 Solvay Conference organized by Belgian chemist Ernest Solvay. [2] Bridgman won the 1946 Nobel Prize in physics for his work in high pressure physics. [1]

Reaction end
In 1961, Bridgman, at the age of 79, shot himself in the head after living with megastatic cancer for some time; his suicide note read in part: [13]

“It isn't decent for society to make a man do this thing himself. Probably this is the last day I will be able to do it myself.”


American surgeon, bioethicist, and death-with-dignity advocate Sherwin Nuland (Ѻ), in his How We Die: Reflections on Life's Final Chapter, following discussion of Seneca’s views on death, cites Bridgman as the foremost clarion call to reason in respect to the need for death with dignity: [13]

“Against such a standard, the suicide of Percy Bridgman was close to being irreproachable. Bridgman was a Harvard professor whose studies in high-pressure physics won him a Nobel Prize in 1946. At the age of seventy-nine and in the final stages of cancer, be continued to work until he could no longer do so. Living at his summer home in Randolph, New Hampshire, he completed the index to a seven-volume collection of his scientific works, sent it off to the Harvard University Press, and then shot himself on August 20, 1961, leaving a suicide note in which he summed up a controversy that has since embroiled an entire world of medical ethics:

‘It is not decent for society to make a man do this to himself. Probably, this is the last day I will be able to do it myself.’

When he died, Bridgman seemed absolutely clear in his mind that he was making the right choice. He worked right up to the final day, tied up loose ends, and carried out his plan. I'm not certain how much consideration he gave to consulting others, but his decision had certainly not been kept a secret from friends and colleagues, because there is ample evidence of his having at least informed some of them in advance. He had become so sick that he felt it doubtful that he would much longer be capable of mustering up the strength to carry out his ironclad resolve. In his final message, Bridgman deplored the necessity of performing his deed unaided. A colleague reported a conversation in which Bridgman said:

‘I would like to take advantage of the situation in which I find myself to establish a general principle; namely, that when the ultimate end is as inevitable as it now appears to be the individual has a right to ask his doctor to end it for him.’?

If a single sentence were needed to epitomize the battle in which we are all now joined, you have just read it.”

Quotes | By
The following are quotes by Bridgman:

“The first business of a man of science is to proclaim the truth as he finds it; and let the world adjust itself as best it can to the new knowledge.”

“There’s as many formulations of the second law as there have been discussions of it.”

“There is no adequate defense except stupidity, against the impact of a new idea.”

“It seems to me that there is a good deal of ballyhoo about scientific method. I venture to think that the people who talk most about it are the people who do least about it. Scientific method is what working scientists do, not what other people or even they themselves may say about it. No working scientist, when he plans an experiment in the laboratory, asks himself whether he is being properly scientific, nor is he interested in whatever method he may be using as method.”

“The humanities are much more complex and difficult than the sciences.”

“By far the most important consequence of the conceptual revolution brought about in physics by relativity and quantum theory lies not in such details as that meter sticks shorten when they move or that simultaneous position and momentum have no meaning, but in the insight that we had not been using our minds properly and that it is important to find out how to do so.”