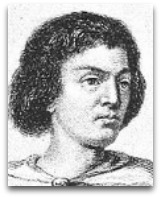 Quotes | On
The following are quotes on or related to Abelard:

“It is indeed impossible to be unmoved at the surprising and multiplied afflictions and persecutions which befel a man of Abelard’s fine genius, when we see them so feelingly described by his own hand. Many of these were owing to the malice of such as were his enemies on the account of his superior learning and merit; yet the great calamities of his life took their rise from his unhappy indulgence of a criminal passion, and giving himself a loose to unwarrantable pleasures. After this he was perpetually involved in sorrow and distress, and in vain sought for ease and quiet in a monastic life. The Letters between him and his beloved Heloise were not written till long after their marriage and separation, and when each of them was dedicated to a life of religion. Accordingly we find in them surprising mixtures of devotion and tenderness, and remaining frailty, and a lively picture of human nature in its contrarieties of passion and reason, its infirmities, and its sufferings.”

“It is true: writing brings forth in the lives of many humans just such destructive results, like Ottilie in Goethe’s Elective Affinities, through whose appearance the fortune of a satisfying life is ruined.”

“Abelard was the keenest thinker and boldest theologian of the 12th century.”

Quotes | By
The following are quotes by Abelard: