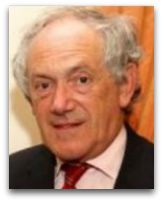 In existographies, Peter Atkins (1940-) (CR:63) is an English physical chemist noted for a number of books and videos thermodynamics, such as 1978 multi-edition Physical Chemistry textbook, the 1987 The Second Law, on the second law, and recent 2007 Laws that Drive the Universe, an layperson's introduction to the four laws of thermodynamics and on the driving force of the universe. [1]

Atkins is well-known to be outspoken on the subject of the overlap between religion and science. Atkins' first venture into this genre was his 1981 book Creation (revised as Creation Revisited, 1992), in which he uses physical chemist principles to argue, in what seems to be a physical chemistry stylized Darwinism, in outline, that elephants and men are evolved emergent types of "molecules equipped for competition, survival, and reproduction", albeit molecules that are "unimportant", "insignificant", and "without purpose." [2] The gist of Atkins’ aim seems to be to dispel the “creator view” of human existence and to replace it with a physical chemist and or thermodynamic view of human existence.

Atkins latest work is the 2011 On Being: A Scientist's Exploration of the Great Questions of Existence, the concluding gist of which, as entitled in his chapter section 2.7 "A Universe Without Purpose", seems to be a rehash of his second law based purposeless argument. Herein, he defines the “driving force” of all chemical reactions, human or otherwise, as “the natural tendency of matter and energy to disperse in disorder” or "all change is driven by purposeless decay" among other laymanized thermodynamics variants. [3]

Difficulties on theory
Where Atkins goes astray in his polemic, in what might be labeled as the “purposeless universe hypothesis”, is that in his tunnel vision ideal of discarding the Biblical view of human existence, he subtly bends, twists, distorts, and over simplifies (dumbifies) the second law, and physical chemistry as a whole, in the name of disproof and agenda. The “pervading idea” of his argument, as he states, is entropy. In this end, where he goes astray in his application of entropy and the second law to evolution and in turn human existence is his over-use of the energy dispersal model of entropy. Atkins’ pervading argument, in short, is as follows: [2]

“Everything is driven by decay. Everything is driven by motiveless, purposeless decay. By [the term] ‘quality’, [we mean] the extent of its dispersal. High quality, useful energy is localized energy. Low quality, wasted energy, is chaotically diffuse energy. Things can get done when energy is localized; but energy loses its potency to motivate change when it has become dispersed. The degradation of quality is chaotic dispersal. Such dispersal is ultimately natural, motiveless, and purposeless. It occurs naturally and spontaneously, and when it occurs it causes change. When it is precipitate it destroys. When it is geared through chains of events it can produce civilizations.”

Correctly, if Atkins was speaking in the correct physical chemistry definition of the matter, everything, in freely going, isothermal, isobaric, earth-bound reaction systems, is "driven" (see: driving force) by free energy change, not by decay as Atkins has laymanized things. In another vein, he rephrases this as:

This is all good and dandy, in overall simplified premise, but the entire spiel, in core structure, is framed in a hugely-distorted view of the second law and of entropy. No where in Rudolf Clausius’ defining textbook The Mechanical Theory of Heat, is entropy or the second law defined as the “tendency of energy to chaos”, nor does Atkins use this interpretation to define entropy or the second law in his standard Physical Chemistry textbook, but when it comes to human affairs, he repeats this mantra ad nauseam throughout his polemic.