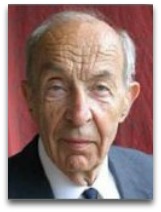 “To talk about the implications of science for theology at a scientific meeting seems to break a taboo. But those who think so are out of date. During the last 15 years this taboo has been removed. What is this taboo? Expressed crudely, it is said that only established scientists should philosophize about science and as such they should be at or beyond middle age. Other scientists better stick to experiments, equations and the minutiae which make up the crucial building blocks of science. Later in life, but only if you are famous, may you discuss the temple of science as a whole. What is middle age? When Eddington gave his delightful Gifford Lectures in Edinburgh he was about 45 years old, the sort of age at which Hawking produced his ‘popular’ book.”

“Do these models give a pointer to god? The steady-state universe, the Hawking model... and the infinitely oscillating model decidedly do not. One might almost regard them as models manufactured for a ‘society of atheists’.”

The rest of the talk seems to revolve around a history of “entropy arguments for gods existence”, which he says are not plausibly arguments, but are historical points of view that have been neglected for the last 70-years.

In 1999, Landsberg, aged 77, in his Seeking Ultimates, devoted his last chapter to the query ‘Does God Exist?’, in which he says Blaise Pascal is the “hero” of the chapter, which is code for agnostic leaning towards theism, aka to take Pascal’s wager in one’s last days of existence, such as John Neumann infamously did. [4]

Education
Landsberg completed his MS in 1946, his PhD and DIC (Diploma of the Imperial College) in 1949, and DSc in 1966. [2] Landsberg wrote several books and published over 300 papers. Landsberg was professor and then emeritus professor at the University of Southampton, 1972 to till his reaction end. [1]