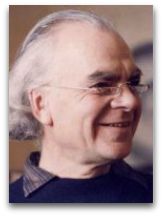 In science, Peter Mitchell (1920-1992) was an English biochemist noted for his

Overview
In 1961, Mitchell introduced his chemiosmotic theory of membrane energy transduction, in which he showed that ATP synthesis, in the mitochondria, was coupled to electrochemical gradients. [1]

In 1977, in commenting in retrospect Mitchell stated: [3]

“In 1961, the four postulates were almost entirely hypothetical; now after sixteen years of experimental scrutiny, they are now generally accepted as experimental facts. My 1966 review has been frequently cited because it was the first paper in which the chemiosmotic rational was discussed in depth, and examined stoichiometrically, thermodynamically, kinetically, and mechanistically in light of available experimental data on the systems described by the four postulates.”

His 1966 review of his theory, entitled “Chemiosmotic Coupling in Oxidative and Photosynthetic Phosphorylation”, went on to become a citation. [2] Mitchell is loosely considered the founder of membrane bioenergetics. [4] Mitchell received the 1978 Nobel Prize for his theory and in his Nobel Lecture cites what he calls the “rather abstract thermodynamic treatment” of chemical transport described in Edward Guggenheim’s 1933 thermodynamics textbook. [5]

Education
Mitchell completed undergraduate work at Queen’s College in the 1940s. In 1942, he began research in the biochemistry department of Cambridge completing his PhD there in 1950 on the topic of the mode of action of penicillin. In 1955, he became the head of the biochemical research unit at Edinburg University, staying there until 1963.