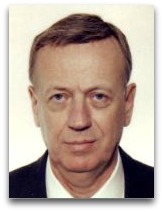 In hmolscience, Peter Pogany (c.1939-) is a Hungarian-born American economist noted, in human thermodynamics, for his 2006 Rethinking the World, wherein he argues that humans are over-grown supermolecules and that culture is a thermodynamic "system".

Overview
In 2006, Pogany, in his Rethinking the World, penned a chapter on the thermodynamics of cultural evolution; the following being a condensed extract from this work: [1]

Pogany goes on to give a good basis of thermodynamic reasoning, discussing Carnot, Clausius, Boltzmann, Gibbs, Prigogine, and a few others, giving an “island example” along the way, but then derails in his analysis by delving into discussions on Claude Shannon and measures of information entropy in bits. He does, however, interestingly, define states of condensed matter, e.g. a piece of coal, as an energy carrier; and superficially discusses the arrow of time, exergy, internal entropy, external entropy, negative entropy, and free energy among other points. He seems to cull his understanding of "free energy", to note, from Nicholas Georgescu-Roegen, which weakens his approach to an extent.

“Accumulated knowledge suggests that humans are billions of highly evolved, overgrown super-molecules (or ‘intensely conscious mice’?) that swarm in ever larger numbers on a piece of rock that wobbles, spins, revolves, and soars into nothingness at break-neck speed with an agitated, burning furnace in its interior.”

As to the origin behind Pogany’s quote, and his bracketed mention of mice, seems to come from American physical chemist Martin Goldstein's 1993 section “The Entropy of a Mouse” from his book The Refrigerator and the Universe, as listed in Pogany’s bibliography, in which Goldstein explains how to calculate the entropy of a mouse. On history, Pogany states: [3]