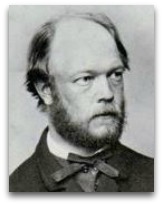 Overview
In 1864, Tait published “Dynamical Theory of Heat” and “Energy” in the North British Review, wherein he began to outline his views on the historical development of thermodynamics. [4] These two articles later became the basis for his 1868 Sketch of Thermodynamics. [5]

In 1867, Tait co-authored, with William Thomson, Treatise on Natural Philosophy, which worked to popularize William Rankine's terms "potential energy" and "kinetic energy", in place of vis mortua and vis viva, respectively. This book is said to have helped to establish the concept of "energy" within the structure of the theory of mechanics. [3]

Associates
Tait was closely associated with English physicist William Thomson and Scottish physicist James Maxwell. The three of them, being life-long good friends, for instance, used the shorthand of “θ∆ics” to signify the science of thermodynamics, in personal communications postcards. [1]
Maxwell's demon
In 1867, Maxwell, in a letter to Tait, introduced his now-famous thought experiment of Maxwell’s demon was conceived. [2]

In 1875, Tait, as a repercussion of the debate, co-authored with Scottish physicist Balfour Stewart the controversial book The Unseen Universe: or Physical Speculations on a Future State, in which they speculate on immortality, supposedly in an energy-thermodynamic sense, the heat death of the universe; how thoughts are molecular motions of the brain; how the universe may contain "bonds of energy" that connect to the thinking aspects of the mind; among curious other subjects. [6]

Education
Tait was a product of the Edinburgh school of thermodynamics.