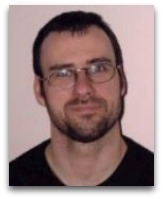 In existographies, Philip J. Moriarty (1968-) (DN:6) [CR:160] is an Irish physicist and hmolscience detractor, noted for his physics commentaries in the Nottingham University's 60 Symbols YouTube channel, the overt focus of which is to give summaries of symbols and constants of physics, e.g. S, k, G, etc., amid which he digresses on related physics applied to philosophy topics, such as whether or not subjects such as thermodynamics (e.g. human chemical thermodynamics) or quantum mechanics (e.g. human quantum mechanics) applies to human interactions, such as he debated with American electrochemical engineer Libb Thims in 2009 (see: Moriarty-Thims debate), or new age topics, such as American geneticist Robert Lanza’s 2007 biocentrism theory of everything, or "quantum physics woo" as Moriarty called it in 2013, about whether quantum physics proves that an afterlife exists. [9]

Overview
In 2009, Moriarty, a professor at Nottingham University, working in the field of nanoscience, who for some six years taught a course in thermal physics—entered into a very opinionated objections to the applications of thermodynamics to humans, as expressed in his 60 Symbols YouTube channel, which carried over into the lengthy Hmolpedia thread facilitated Moriarty-Thims debate, during which time he commented objectionably on the Rossini debate (2006) and solicited emails, together with American organic chemist Frank Lambert, to professors at the University of Illinois, Chicago, that American electrochemical engineer Libb Thims should not be allowed to lecture (see: Libb Thims (lectures)), to thermodynamics students about human thermodynamics, all in defense of his position that you can say that entropy (thermodynamic entropy) can be applied to arrangements of students in a field as an analogy, say to help explain the concept, but not in reality.

Entropy videos
On 23 Apr 2009, Sixty Symbols uploaded their first video (below left) on the symbol "S" for entropy, during which Moriarty gives the secondary, i.e. non-primary (Clausius), statistical mechanics (i.e. Boltzmann) version entropy, during which time described entropy in terms of an analogy based around the distribution or arrangement of students in a university park.

On 30 Apr 2009, American electrochemical engineer Libb Thims, unaware of Moriarty’s video, made a semi-humorous “What is Entropy?” video, for his Human Chemistry 101 channel, since removed (owing to too many negative down votes, being that people didn’t get the inside joke), based on a combination of James Maxwell's1877 discussions (Ѻ) with Clausius about the origin of the term “entropy” and his followup 1878 discussion of entropy as the theory of transformation-equivalents and how it will take “several generations” before we can expect beginners to receive as axiomatic the theory of entropy, together with video footage of his 1-year-old nephew flipping through an original second edition copy of Clausius’ The Mechanical Theory of Heat.

Thims then found Moriarty’s video and went on to discuss, below Moriarty's video forum, the issues with Moriarty's discourse on the origin of the symbol "S", namely:

(a) that the symbol S comes from Rudolf Clausius, not Ludwig Boltzmann (who used the symbol E for entropy);
(b) that the relationship of the Poincare recurrence theorem and entropy is a mute issue;

(c) that the exact equation used in the video, S = k ln Ω, was penned not by Boltzmann (although based on his work and inscribed on Boltzmann's tombstone) but by Max Planck.
(d) etc.

In objection to the premise that entropy and quantum mechanics apply to human activity, on Aug 30th, 2009, Moriarty commented. in regards to human entropy (or the premise of the entropy of humans):

“[Thims has] taken the abuse of the term entropy to an entirely new level, by suggesting that it—and, unbelievably, quantum mechanics—can be applied to 'interactions' in romantic human relationships.”

A week earlier, in video posted on Aug 23, 2009, Moriarty had used an analogy involving distributions of students to describe entropy (see below):

“Then, as they sort of spread out or move around [from this packed state], we say that they are moving to a high entropy state … and that’s what entropy’s really about ... about this dispersal of energy, about moving from a state where everything is nicely packed and close together to one where everything is spread out … and you can apply that to gas molecules just as easily as you can to students.”

Moriarty clarified in a subsequent YouTube video (see above) his position, highlighting that the distribution of students was used as an analogy. In Sept. 2009, and as part of the lengthy online debate discussed above, Moriarty further clarified his position for Thims:

“It is this distinction between analogy and mathematical/physical equivalence that is so important and which you seem unable to grasp. Hence, you misinterpreted the analogy I drew in the Sixty Symbols YouTube video on entropy and argued that I was actually claiming that one could associate a thermodynamic entropy with the arrangement of students.

That someone could confuse the analogy with the actual thermodynamic quantity just never occurred to me. Of the approximately 750 physics majors who took the first-year Thermal and Kinetic Physics module I taught, not one made this fundamental error. Similarly, the number of professional scientists who have made this error is very small indeed.”

In using the phrase "dispersal of energy" in the YouTube video to describe entropy (see: entropy (misinterpretations)), we see that Moriarty agrees with the interpretation of entropy put forward by American chemist Frank Lambert (whom he regularly cites as a good reference), who in turn culls his views of entropy from William Thomson, and admits to never having read any of Clausius' textbook The Mechanical Theory of Heat, let alone any of his work on entropy. [7]

In any event, these objections as to "Thims abusing entropy", however, were made without an actual reading of the 2007 textbook Human Chemistry [3]. This is perhaps not surprising as this book was not subject to peer review and, moreover, is published by LuLu.com, a self-publishing/vanity-publishing internet business. Unsurprisingly, there are a very small number of people who have used the "theories" in Human Chemistry in further research and publication. However, Russian physical chemist Georgi Gladyshev, and Canadian mathematical economist Jing Chen, etc., find the theory and application cogent. [4] American sociologist Satch Ejike, for example, used Thims' quantum mechanical modeling of human bonding in psychological application his 2008 book Find a Good Man and Keep Him, commenting that the human quantum chemical theory it “is a very viable explanatory framework.” [5] It should also be noted, however, that there have been many objections put forward to the concept of human thermodynamics espoused by Thims (see Human Thermodynamics (Objections To)).

In commentary on the point made by Thims that, according to Willard Gibbs’ 1876 On the Equilibrium of Heterogeneous Substances, which is considered as the Principia of thermodynamics, that “all material systems are thermodynamics systems”, whereby a system of humans (made of matter) is one such material system, and that “the laws of thermodynamics which govern any material system is greatly facilitated by considering the energy and entropy of the system in the various states of which it is capable”, Moriarty responds back with:

“Where﻿ did Gibbs state that ‘a society is one such material system’? He didn't - that is your particular (incorrect) reading of the application of thermodynamics.”

These comments by Moriarty are akin to those of Paul Samuelson (a student of Gibbs). In other words, when teaching a class on thermal physics or thermodynamics, the first lesson (lecture) typically involves instilling the rule that the laws of thermodynamics are universal (laws of the universal), in that they apply to any and all systems. Thims highlights the contribution of YouTube user (PenguinJin) who commented:

“So, why are﻿ we exempt from this application of thermodynamics? Why would energy alter its behavior in a fundamental way when it began manifesting as the patterns of human behavior? Recursion is everywhere.”

“The main points are:

(i) An arrangement of students (or socks, or objects in a room) will not *spontaneously* rearrange themselves (unlike the milk molecules mentioned in the video).
(ii) There is no change in the thermodynamic free energy of, e.g., socks [or students], if we rearrange them.”

Moreover, Moriarty made the point repeatedly during the debate with Thims that in his, and others' opinion, a grouping of students is not a thermodynamic "system" (see Comment #7, Comment #99, and Comment #270 (the latter outlines Thims' response to this particular criticism)). In short, according to Moriarty, the rule of spontaneity criterion does not apply to human interactions, e.g. love the chemical reaction, and there is no change in Gibbs free energy when a system of students rearranges over time (when plotted out on a free energy map or extent of reaction diagram)? Moriarty seems to have issue with the logic that humans may be considered simply as obeying the same laws of physics as gas molecules (i.e. human molecules).

Winiarski's thermodynamics of love
In response to the comment, made by Thims, that Polish sociologist Leon Winiarski taught a course for six-years (1894-1900),﻿ at the University of Geneva, themed on the postulate of hunger and love functioning as two forms of thermodynamics potential; and how energy and entropy relate to this, using Clausius and Lagrange as course material, Moriarty comments back with:

“If I understand you correctly, you *are* suggesting that the (romantic) relationships of groups of humans are associated with a thermodynamic entropy (and other functions of state)! This is very worrying … you seem to be making the﻿ same type[s] of fundamental error[s] pointed out in the essays of Frank Lambert.” [6]

In short, Moriarty believes that state functions do not apply to human systems.

Summary
In sum, Moriarty vocalized objections to the application of thermodynamics, chemistry, or quantum mechanics to the study of human movement, bonding, and organization, as expressed in YouTube video commentary and in online debate with American chemical engineer Libb Thims. Moriarty heavily criticizes Thims' human thermodynamics/human chemistry thesis throughout the debate, repeatedly labeling it as "nonsensical pseudoscience" in response to statements such as the following by Thims:

The origin of the debate with Thims arose with Moriarty's contribution to a video on entropy (as part of the University of Nottingham's Sixty Symbols YouTube project) during which he stated: [1]

“Concepts of entropy apply to gas molecules; you cannot say that a particular arrangement of students has a thermodynamic entropy.”

In Thims' view, however, this statement is in conflict with the opinions of Austrian physicist Ludwig Boltzmann who in 1886 postulated that: "life is a struggle for entropy." [8]. Key elements of Thims' human thermodynamics "thesis" are discussed in detail during the debate. As stated during the debate, Moriarty considers Thims' general view to be as follows:

"Your [Thims’] laughable central premise is as follows: Well, a human is made of lots of atoms. Therefore a human is just a big molecule. Big molecules will behave just like small molecules. Therefore I can apply all thermodynamic principles to human 'molecules'."

Education
Moriarty is professor at Nottingham University working in the field of nanoscience and previously taught a course in thermal physics for six years.

Quotes | On
The following are quotes on Moriarty:

“It's a little more than that. I attend Moriarty’s university, and he's universally disliked because he refuses to ever acknowledge other viewpoints than his own. He's dogmatic, and that's unacceptable in someone who calls themselves a scientist.”