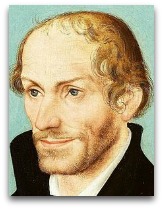 In existographies, Philipp Melanchthon (1497-1560) (IQ:180|#177) [RGM:241|1,500+] (Cattell 1000:137) (CR:15), was a German child prodigy, a youngest college graduate, and university head, noted for being the second most important individual behind the Lutheran reformation, behind Martin Luther, via acting as restraint on Luther's more "counterproductive impulses". [1]

Copernicus
Melanchthon, an associate of Martin Luther — who had referred to Copernicus as a “fool [who] wants to turn the whole art of astronomy upside down!” — described Copernicus’ heliocentric theory as an “old joke” (see: crackpot), implying that it was a superfluous revival of a frivolous circa 250BC suggestion by Aristarchus.

In Oct 1541, Melanchthon, after having received a copy of Rheticus’ First Account (Narratio Prima), the previous year, the first condensed summary of Copernicus’ theory, wrote the following to a correspondent: [2]

“[Some think it] a distinguished achievement to construct such a crazy thing as that Prussian astronomer who moves the earth and fixes the sun. Verily, wise rulers should tame the unrestraint of men’s minds.”

An alternative translation reads as follows: [4]

“Many hold it an excellent idea to praise an absurd matter, like that sarmatic [Polish] astronomer, who moves the earth and lets the sun stand still.”

Other
Melanchthon, supposedly, was acquainted with Johann Faust.

Education
The early education of Melanchthon was summarized by Catherine Cox (1926) as follows: [1]

“Melanchthon is distinguished for his brilliant mental powers and his extraordinarily precocious scholastic achievement. ‘In matters of intellect he had a quick perception, an acute penetration, a retentive memory, an ardent thirst for knowledge, and the ability to express his thoughts with accuracy and precision. In school and out he was incessantly asking questions, and often would gather a few school fellows around him for the purpose of discussing what had been read and learned.’ Before he was 11 he disputed with roving Bacchanti, and it was seldom that one could withstand him. He was among the few ‘brightest and best’ of the academic youth who were permitted to study Greek. He wrote Latin verses at 12. Before he was 13 he entered the University of Heidelberg, where he read poetry, wrote verses, and studied, for the most part without other direction than his own. His reputation as a Greek scholar was soon established. During his first year, and before he was 13, he was appointed to hear the Greek recitations in the professor's absence. He tutored the sons of a nobleman. Evidences of his ability are preserved in two Latin poems written at 13, when he had already taken rank among the learned. At 14 he took the Bachelor's degree. It is believed that he was working on his grammar at this time. At the end of another year he had fulfilled the requirements for the Master's degree, but the degree was denied him because of ‘his youth and boyish appearance.’ At 15 he went to Tubingen, where his studies ‘took a wide range’. ‘He sought to know everything and to be a master in every science’. ‘He gave attention chiefly to Greek and Latin literature, to philosophy, history, eloquence, logic, and mathematics, heard the theologians and the lecturers on law and medicine, and read Galen so carefully that he could repeat most of his works from memory.’ Just before his 17th birthday he received the degree of Master of Arts as first among eleven candidates and, with the degree, the license as privat docent to lecture on the ancient classics.”

Here we see Melanchthon ranking in among the youngest college graduates.