In science, photon mill is the conceptual idea that the sun acts as a type of windmill or watermill to the effect that flow of photons through any given surface section of the earth acts to produce work in the same way that water turning a water wheel works mechanical grinders to grind corn; the work of evolution being the typical topic of discussion. The term seems to be used frequently in ecological thermodynamics.

Pre-history
In his famous 1824 On the Motive Power of Fire, French physicist Sadi Carnot outlined the view of how the heat (or caloric as he conceived things, initially) from the sun acts as kind of watermill when it falls from a hot to a cold body in the production of work both on the surface of the earth and in steam engine or heat engine. Carnot used the term "fall of the caloric" akin to "fall of the water" to illustrate this comparison. Carnot states:

“According to the principles at the present time, we can compare with sufficient accuracy the motive power of heat to that of a waterfall. Each has a maximum what we cannot exceed, whatever may be, on the other hand, the machine which is acted upon by the water, and whatever, on the other hand, the substance acted upon by the heat. The motive power of a waterfall depends on its height and on the quantity of the liquid; the motive power of heat depends also on the quantity of caloric used, and on what may be termed, on what in fact we will call, the height of its fall,* that is to say, the difference of temperature of the bodies between which the exchange of caloric is made. In the waterfall the motive power is exactly proportional to the difference of the level between the higher and lower reservoirs. In the fall of caloric the motive power undoubtedly increases with the difference of temperature between the warm and cold bodies; but we do not know whether it is proportional to this difference. We do not know, for example, whether the fall of caloric from 100 to 50 degrees furnishes more or less motive power than the fall of this same caloric from 50 to zero. It is a question which we propose to examine hereafter.”

The asterisk mark (*) goes to a footnote which states: “the matter here dealt with being entirely new, we are obliged to employ expressions not in use as yet, and which perhaps are less clear than is desirable.”

In 1886, Austrian physicist Ludwig Boltzmann, in his famous lecture “The Second Law of Thermodynamics”, stated the following: [10]

“The general struggle for existence of animate beings is not a struggle for raw materials—these, for organisms, are air, water and soil, all abundantly available—nor for energy, which exists in plenty in any body in the form of heat Q, but of a struggle for entropy S, which becomes available through the transition of energy from the hot sun to the cold earth.”


In 1913, Swiss astrophysicist and meteorologist Robert Emden stated something similar: [11]

“The possibility of terrestrial life results from the vast increase of entropy associated with the transformation of hot solar radiation into colder terrestrial radiation.”

In 1961, Hungarian bioenergetics researcher Albert Szent-Gyorgyi gave an outline of the loose idea of a photon mill as follows: [1]

"It is common knowledge that the ultimate source of all our energy and negative entropy is the radiation of the sun. When a photon interacts with a material particle on our globe it lifts one electron from an electron pair to a higher level. This excited state, as a rule has but a very short lifetime and the electron drops back within 10-7 to 10-8 seconds to the ground state giving off its excess energy in one way or another. Life has learned to catch the electron in the excited state, uncouple it from its partner and let it drop back to the ground state through its biological machinery, utilizing it excess energy for life processes."

Szent-Gyorgyi, to note, did although not using the term “photon mill” specifically.

Lotka
In 1925, Alfred Lotka, in his Elements of Physical Biology, seems to have been the first to diagrammatically conceptualize "life" as a function of the "photon mill" or "overshot mill wheel" as he calls it, diagram shown above, about which he says (pg. 334) the following:

“The circulation of substance in the organic world and its inorganic background, which was considered in an earlier chapter in its purely material relations, now acquires a new significance. We recognize in it now a typical characteristic of the great world engine which, for continued operation, must of necessity work thus in cycles. The picture presented to our minds is that of a gigantic overshot mill wheel, receiving from above the stream of sunlight with its two hundred twenty-seven million gross horsepower though much of this is split without effect and discharging below its dissipated energy in the form of heat at the general temperature level. The main outstanding features of the wheel are represented diagrammatically in figure 68. But in detail the engine is infinitely complex, and the main cycle contains within itself a maze of subsidiary cycles. And, since the parts of the engine are all interrelated, it may happen that the output of the great wheel is limited, or at least hampered, by the performance of one or more of the wheels within the wheel. For it must be remembered that the output of each transformer is determined both by its mass and by its rate of revolution. Hence if the working substance, or any ingredient of the working substance of any of the subsidiary transformers, reaches its limits, a limit may at the same time be set for the performance of the great transformer as a whole”

Ebeling-Feistel Photonenmühle schematic
In 1982, the actual term “photon mill”, was introduced via the German term "Photonenmühle" by German physical evolutionists Werner Ebeling and Rainer Feistel, who describe the concept verbally and via accompanying schematic diagram: [9] 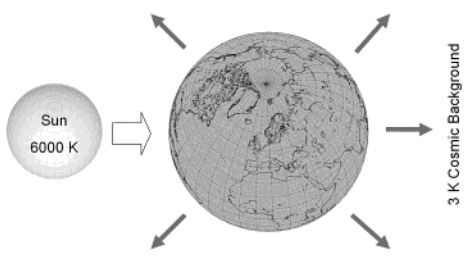 Their model depicts the estimation of the terrestrial entropy export, about which the earth is described as existing at mean surface temperature of about 300 K, located amid a radiative thermal gradient of 6000 K (the hot sun) and 3 K (the cold cosmic background), through which the flow of photons (similar to the flow of water in a water mill), operate, as they describe in 2011, as such: “entropy production necessarily accompanies the multiple self-organization phenomena and sustained dissipative structures observed in our natural environment.” [9]

Another version occurs in Ebeling, Andreas Engel, and Feistel's 1988 'Physik der Evolutionsprozesse', wherein they use the exact phrasing of 'hot' and 'cold' photons and give a diagram of at 'Photonenmühle' or photon mill. [2]

Polish-born Canadian physicist Marek Roland claims, to note, that the notion "Hot" and "Cold" photons concepts, as found on several earth system thermodynamical depictions, originated and or were explained in his paper 1992 paper "Life on Earth - flow of Energy and Entropy". [5]

The following is a circa 1999 rendition of a photon mill from Peter Strazewski’s talk “A Pleading for Chemistry”, based on the 1994 version by Werner Ebeling and Rainer Feistel, which describes a photon mill as being the main driving force for the self-organization and evolution on planets. [4] 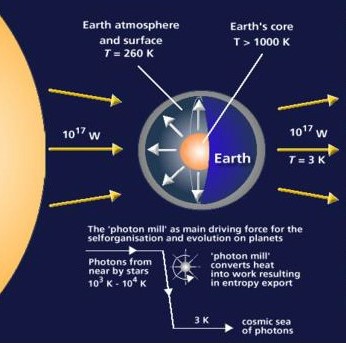 The following, below left, is 2004 online German animated gif version of a "Photonenmühle", described as such: “the mill supplies the earth with photons or physical negative entropy and provides information for life processes”, or something along these lines. [14] Below right is a Werner Ebeling version of the sun-earth system as a photon mill. [15]

In 2005, based on the Roland-version, American ecologist Eric Schneider made a similar version in 2005, as shown below. [6]

The version shown adjacent is made by American chemist Peter Strazewki (c.1999) and is an English-modified annotated version based on version found in the the 1994 book Chaos and Kosmos: Prinzipien der Evolution. [3]

In 2008, German climate researcher Y.M. Svirezhev describes life and relation to the photon mill as such: [12]

“Life on earth is a product of the so-called ‘photon’s mill’, which has started to function when our solar system was in the form of a matter’s ‘clots’ [see: nebular hypothesis] embedded into the ocean of ‘cold’ photons with temperature T = 2.7 K. Evolution and self-organization of planets (including life on our planet) is a result of this mill’s functioning, which is happening due to the fact that the sun’s surface irradiates the ‘hot’ photons’ at T = 5800 K, and these photons reach the cold planet’s surfaces. Then they cool down to the temperature of the surface and irradiated back into space. For the earth, this temperature is equal to 253 K; it is the temperature, which could be measured by an observer at the top of the atmosphere. Formerly, the photon’s mill is a typical ‘heat machine’ that is functioning by Carnot cycle, but its working body is the photon gas.”

Issues in this description abound; to list a few: the working body is not the photon gas, but the geometry of elements about any given region of interest on or near any given surface section of the earth; second, the notion of "formerly" a heat engine is incorrect, the action of the laws of thermodynamics are still in operation acting to create animate movement in the form of cyclical surface attached heat engines; the cold photon / hot photon labeling has issues in itself: the terms hot body and cold body are the correct labeling; the mechanism of heat transfer, whether radiation, conduction, or convection, is irrelevant.

which he says is “called the photon mill on earth”, and rather haphazardly used the sun surface temperature of 5800 K as Tin, a “universe at a lower temperature” of 260 K as Tout, a Q of 10E17 joules, being the amount of heat the “surface of the earth receives”, to calculate that ΔSe equals -4x10E14 J/K, meaning that “one square meter of the surface of the earth radiates the entropy of about 1 J/K during one second into the universe, which he thus uses to conclude that “the radiated entropy decreases the disorder on earth, that is the earth gains order”. [8] Issues abound in this calculation, to say the least.

Discussion
In some of the above descriptions of this so-called "photon" mill, e.g. the "working body is the photon gas", it would seem that there are different descriptions and conceptions as to where exactly the boundary or location of this "mill" is, whether in the sun, on the surface of the earth, or the sun-earth system combined.