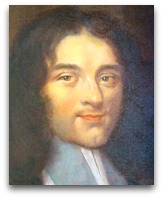 Atheist | Morals
In 1682, Bayle, in his Various Thoughts on the Occasion of the Comet, in commentary on the famous comet of 1680, argued that comets were a natural phenomenon, that comets did not presage disaster, after which he presented the “first-ever all-out defense of the morals of an atheist (see: atheistic morality)”, as Jennifer Hecht (2003) summarizes things. [2]

Dictionary | Critical history
In 1695 to 1697, Bayle penned his 3,000-entry Historical and Critical Dictionary, wherein each entry is accompanied by lengthy footnotes, themselves up to 20-pages per note, and these footnotes have footnotes; herein he discussed things, such as the "three impostors" legend, which he attributed to Averroes. (Ѻ) Bayle also upheld Michel Montaigne's claim that religious claims are not confirmed by any inner principle, but are fed to people as children. [2]

This multi-volume work has been referred to, by some, as the "arsenal of the enlightenment" and or a "bible for doubters" (see: atheist's bible).

Foe Kiao | Nothingness and vacuum
Bayle, in his Critical and Historical Dictionary, Volume 5 (Ѻ), discusses a Chinese atheism sect called “Foe Kiao” (65BC), whose founder he refers to as “Foe”, which renders as “no man”, whose creed was the following: [2]

“There is nothing to seek, nor anything to put one’s hopes on, except the nothingness and the vacuum that is the principle of all things. Our parents came forth from this vacuum and they returned there after death.”

Daniel Herman (2014), to note, asserts that Herman Melville had read this philosophy and had this mind when he penned the character of Captain Ahab of Moby Dick, and that what Bayle was referring to was the “Ch’an school” of China or its equivalent the “Zen Buddhism” school in Japan. (Ѻ)

Voltaire
In 1755, Voltaire, in his "Poem on the Lisbon Disaster", cited Bayle as upgrade to Plato and Epicurus.

Quotes | On
The following are quotes on Bayle:

“Anaxagoras is said to have been the first who supposed the universe created and governed by an intelligence: Aristotle reproaches him with having made an automaton of this intelligence; or in other words, with ascribing to it the production of things, only when he was at a loss to account for their appearance (see: Pierre Bayle’s Dictionary, article: Anaxagoras (note E)).”

“The illustrious Bayle [Thoughts on Various Subjects (§:21)], who teaches us so ably to think, says, with abundant reason, that ‘there is nothing but a good and solid philosophy, which can like another Hercules, exterminate those monsters called popular errors: it is that alone which can set the mind at liberty’.”

Quotes | By
The following are noted quotes by Bayle:

“They are not the general opinions of the mind, which determine us to act, but the passions.”

“Spinoza was the greatest atheist there ever was and who was so infatuated with certain principles of philosophy that, to meditate on them better he went into retirement, renouncing all that may be called the pleasures and vanities of the world and concerning himself only with abstruse meditations. Sensing that he was near his end [see: atheist deathbed deconversions], he had his landlady come and begged her to prevent any minister from coming to see him in that condition. His reason was, as is known from one of his friends [Adriaan Paets, according to Verniere], that he wished to die without a dispute and that he feared falling into some weakness of the understanding which would make him say something that could be used against his principles. This is to say that he feared that it would be spread about in the world that, when facing death, his conscience having awoken, it made him give the lie to his bravery and renounce his sentiments. Can a more ridiculous and more extreme vanity be seen than this one, and a crazier passion for the false idea one forms of constancy?”

“In matters of religion it is very easy to deceive a man, and very hard to undeceive him.”