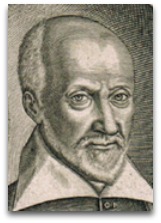 Overview
In 1601, Charron published On Wisdom (De la sagesse), wherein he presented a system of moral philosophy that developed the ideas of Michel Montaigne; it was characterized, for centuries, as a “seminary of atheism”. [1]

In 1640, Charron was listed in Marin Mersenne’s “catalog of atheists”.

Quotes | On
The following are quotes on Charron:

“A library should not be without Sextus Empiricus and the two best books in the world are the Bible and Pierre Charron’s Of Wisdom.”

“A few years after the appearance of the Essays [1588] of Montaigne, there was published in France a work, which, though now little read, possessed in the seventeenth century a reputation of the highest order. This was the celebrated Treatise on Wisdom [1601], by Charron, in which we find, for the first time, an attempt made in a modern language to construct a system of morals without the aid of theology. There is about the work of Charron a systematic completeness which never fails to attract attention. In originality, he was, in some respects, inferior to Montaigne; but he had the advantage of coming after him, and there can be no doubt that he rose to an elevation which, to Montaigne, would have been inaccessible.

Taking his stand, as it were, on the summit of knowledge, he boldly attempts to enumerate the elements of wisdom, and the conditions under which those elements will work. In the scheme which he thus constructs, he entirely omits theological dogmas; and he treats with undissembled scorn many of those conclusions which the people had hitherto universally received. He reminds his countrymen that their religion is the accidental result of their birth and education, and that if they had been born in a Mohammedan country, they would have been as firm believers in Mohammedanism as they then were in Christianity [see: religion as a function of birthplace]. From this consideration, he insists on the absurdity of their troubling themselves about the variety of creeds, seeing that such variety is the result of circumstances over which they have no control. Also, it is to be observed that each of these different religions declares itself to be the true one and all of them are equally based upon supernatural pretensions, such as mysteries, miracles, prophets, and the like. It is because men forget these things, that they are the slaves of that confidence which is the great obstacle to all real knowledge, and which can only be removed by taking such a large and comprehensive view, as will show us how all nations cling with equal zeal to the tenets in which they have been educated.

And, says Charron, if we look a little deeper, we shall see that each of the great religions is built upon that which preceded it. Thus, the religion of the Jews is founded upon that of the Egyptians [see: Egyptian religion]; Christianity is the result of Judaism; and, from these two last, there has naturally sprung Mohammedanism. We, therefore, adds this great writer, should rise above the pretensions of hostile sects, and, without being terrified by the fear of future punishment [see: hell], or allured by the hope of future happiness [see: heaven; afterlife], we should be content with such practical religion as consists in performing the duties of life; and, uncontrolled by the dogmas of any particular creed, we should strive to make the soul retire inward upon itself, and by the efforts of its own contemplation, admire the ineffable grandeur of the being of beings, the supreme cause of all created things. Such were the sentiments which, in the year 1601, were for the first time laid before the French people in their own mother tongue.”

Quotes | By
The following are quotes by Charron:

“Whoever does not know how to be silent, is rarely able to speak well.”

References
1. Hecht, Jennifer M. (2003). Doubt: A History: The Great Doubters and Their Legacy of Innovation from Socrates and Jesus to Thomas (pgs. 307-08). HarperOne.