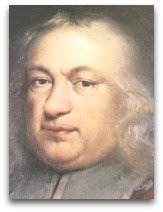 Quotes | By
The following are quotes by Fermat:

“Perhaps, posterity will thank me for having shown that the ancients did not know everything.”

— Pierre Fermat (1659), “Letter to Pierre de Carcavi (an amateur mathematician) in 'Relation of New Discoveries in the Science of Numbers'” (Ѻ), Aug

“To divide a cube into two other cubes, a fourth power, or in general any power whatever into two powers of the same denomination above the second is impossible, and I have assuredly found an admirable proof of this, but the margin is too narrow to contain it.”

— Pierre Fermat (c.1660), theorem (Ѻ), beside the eighth proposition of the second book of Diophantus; Heinrich Olbers attempted to coax Carl Gauss in to solving this in 1816; it was finally solved by Andrew Wiles in 1994