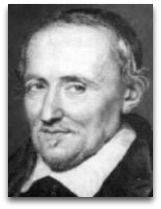 In existographies, Pierre Gassendi (1592-1655) (IQ:190|#30) (Cattell 1000:218) [RGM:379|1,500+] (GPE:50) (GCE:26) (GME:30) [CR:99] was a French thinker and polymath noted for his explosion on the atomic theory, physics, and philosophical implications of the circa 300BC work of Greek philosopher Epicurus, outlined in his 1647 book De vita, moribus, et doctrina Epicuri libri octo (On the Life and Death of Epicurus Book Eight) followed by the 1649 commentary Syntagma philosophiae Epicuri (Arrangement of the Philosophy of Epicurus), in which he was the first (or one of the first) to coin the term ‘molecule’ defined as two or more atoms joined together in an attachment. The set of books were supposedly written to counter the philosophical views of Rene Descartes.

Astronomy
Gassendi, using telescope lenses provided by Galileo Galilei, made numerous astronomical observations that helped establish the validity of Kepler’s laws of planetary motion. In 1631, he observed Mercury transit in front of the sun, thus providing strong evidence of the Copernican model. Gassendi also denounced astrology since it had no empirical support. [5]

Moving ship experiment
Gassendi did the experiment in which a stone was dropped from the mast of a moving ship, to test whether it would maintain the speed of the ship, and fall at the base of the mast, or whether it would fall behind or in front of the mast, because the earth was at rest (Ptolemaic) and or moving (Copernican). Galileo, prior to Gassendi, in 1624, had suggested the thought experiment as a way to test for the validity of Copernicanism (Ѻ); later publishing an account of it is his 1632 his Dialogue Concerning the two Chief World Systems. (Ѻ)

Animation
Gassendi gave the following comments in regards to animation and movement: [3]

"Who can easily comprehend that small thing … within the body of an elephant … that it should be able to agitate such a bulk, and to cause it to perform a swift and harmonious dance? But indeed, the same fiery nature of the soul, serves within the body by its own mobility, what a little flame of gunpowder does in a cannon: it not only drives the bullet with so much force, but also drives back the whole machine with so great strength."

Gassendi, here, in his comment "but also drives back", seems to be speaking of what would be come the third law of motion, of the laws of motion (1687); and his his comment about the great effect of the "little flame" is a precursor to the concept of activation energy (1889).

In his descriptions, such as above, he might have also used the term "animal machine" (check). [4]

Molecules
In his 1649 book, Gassendi presented the view that the properties of atoms (e.g. their taste) depend on their shape (pointed or round, elongated or squat, etc.), and he had the idea that they might join together, to form what he called ‘molecules’, by a kind of hook-and-eye mechanism. [1] Gassendi held the view that objects, such as metal, should be resolvable into the five elements, but that he held the unique view that the five elements should be further resolved into seeds (or molecules) and then into atoms: [2]

“I remain silent here about what could be added concerning the resolution of those five principles into their seeds and finally into atoms.”

In short, he wrote a book on the life of Epicurus, reasoned that to account for the size and shape of atoms moving in a void could account for the properties of matter. Heat was due to small, round atoms; cold, to pyramidal atoms with sharp points, which accounted for the pricking sensation of severe cold; and solids were held together by interlacing hooks.

Evolution
In his reformulation of Lucretius’ view of evolution, wherein the world began as a random arrangement of separated atoms that came together by chance to form seeds and bodies, Gassendi gave the view that:

“While [the atoms] are moving in various ways and meeting, interweaving, intermingling, unrolling, uniting, and being fitted together, molecules or small structures similar to molecules are created, from which the actual seeds are constructed and fashioned.”

This seems to be a fairly advanced view for his day in age, possibly comparable to the later work of French philosopher Jean Sales and his 1789 human molecular hypothesis.

Religion
Gassendi, while following the basic tenets of Greek atomic theory, believed that atoms were put their by god. [5]

Note
It is sometimes said that Rene Descartes may have used the term ‘molecule’ prior to Gassendi, as some references attribute the etymology of the term molecule to Descartes, but a definitive reference for this needs to be determined.

Quotes | On
The following are quotes on Gassendi:

“This child will one day be the marvel of his age.”

“But because men may yet be puzzled with the universality and constancy of this regularity, and its long continuance through so many ages, that there are no records at all of the contrary anywhere to be found; the atomic atheist further adds, that the senseless atoms, playing and toying up and down, without any care or thought, and from eternity trying all manner of tricks, conclusions and experiments, were at length (they know not how) taught, and by the necessity of things themselves, as it were, driven, to a certain kind of trade of artificialness and methodicalness; so that though their motions were at first all casual and fortuitous, yet in length of time they became orderly and artificial, and governed by a certain law, they contracting as it were upon themselves, by long practice and experience, a kind of habit of moving regularly; or else being, by the mere necessity of things, at length forced so to move, as they should have done, had art and wisdom directed them.”