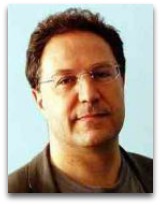 In human thermodynamics, Pierre A. Levy (1956-) is a Canadian cyberspace philosopher noted for his 1994 book Collective Intelligence, in which, very superficially and verbally, he theorizes on human molecule / human chemistry / human thermodynamics type of metaphors and logic applied to the growing social bonding and organization of the internet.

Overview
Levy defines collectives as organic “molar groups”, he speaks of entropy of men and women in bulk, theorizes about the engineering social bonds from a molecular philosophy / political thermodynamics point of view, even being one of the first to use the term human thermodynamics in a sentence. His main theme is to view the internet as a new type of connective mind (like the noosphere) and to explain this organization through the sciences of chemistry (people in groups viewed as molar masses), thermodynamics, self-organization, among other subjects. In defining collective intelligence, Levy states: “the possibility of cyberspace allows us to envisage forms of economic and social organization based on collective intelligence and the enhancement of humanity in all its variety.” On entropy he asks:

“How do we stop treating men and women entropically, in bulk, in the mass, as if they were interchangeable within their category, and consider them as unique individuals?”

On the question of management of his new internet organization, Levy interestingly argues that a new field of human molecular social engineering will be needed:

“When intelligently managed organizations are no longer able to confront the complexity of existing situations, how do we make the transition to organizations that are collectively intelligent? These are representative of the problems that face us when we attempt to engineer the social bond—the molecular technology of a politics that has yet to be invented.”

In defining groups in the metaphor of chemistry he states:

“Families, clans, and tribes are organic groups [carbon-based entities]. Nations, institutions, religions, larger corporations, as well as the revolutionary ‘masses’ are organized groups, molar groups, which undergo a process of transcendence or exteriority in forming and maintaining themselves. Finally, self-organized, or molecular, groups realize the ideal of direct democracy within very larger communities in the process of mutation and deterritorialization.”

Thermodynamics
In rare pre-year-2000 human thermodynamics quotations, Levy is one of the earliest users of the term:

“Based on identities of adhesion, individuals are seen as a mass, as numbers, independent of their molecular wealth. The molar group organizes a kind of human thermodynamics, an exteriorized channeling of behavior and character that squanders individual qualities.”

Beyond these few example quotes, it seems that his entire section one of his book, entitled “Engineering the Social Bond”, specifically chapter 3: From the Molar to the Molecular: the Technology of the Collective Intelligence (pgs. 39-56), is a treasure trove of interesting human molecular theory, yet to be explored.

Education
Levy completed his MS in the history of science (1980) at Sorbonne, Paris, his PhD in sociology (1983) at EHESS, Paris, and PhD in information and communication sciences (1991) at Grenoble, France. [2]