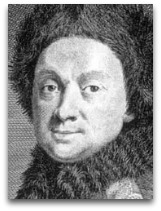 Voltaire
Maupertuis and Voltaire seems to have an antagonistic feuding relationships. Voltaire, supposedly, had referred to Julien La Mettrie as the “court atheist” of Frederick the Great; also, shortly, after La Mettrie passed (1751), Maupertuis spread the story that Voltaire had said that now the post of the “royal atheist” was vacant. [13]

Principle of least action
Maupertuis, at some point, generalized Newton’s first law, to formulate the theorem of least action, the gist of which Alfred Whitehead (1925) summarizes as follows:

“Maupertuis conjectured that a particle travelling through a field of force would realize the least possible amount of some quantity. He discovered such a quantity and called it the integral action between the time limits considered. In modern phraseology it is the sum through successive small lapses of time of the difference between the kinetic and potential energies of the particle at each successive instant. This action, therefore, has to do with the interchange between the energy arising from motion and the energy arising from position. Maupertuis had discovered the famous theorem of least action.”

Whitehead goes onto explain how this method was extended by Joseph Lagrange. [12]

Between 1881 and 1884, German physicist Hermann Helmholtz attacked the question of how to integrate energy conservation and Maupertuis's principle of least action. Note: check to see how this relates to his 1882 On the Thermodynamics of Chemical Processes and free energy or free energy minimization.

Maupertuis seems to have held a panpsychism/panbioism perspective, ascribed to “corpuscles” (atoms) the property of life and intelligence, albeit according to relative degrees in matter, increasing from stones to plants to animals; and that the intelligence attained by the whole organism was not merely a matter of amount, but also a matter of arrangement. [9]

Maupertuis, in debate with Denis Diderot, described as an “exchange or polemic of two authors trading accusations of atheism” (Ѻ), surrounding the definition of matter and molecule, promoted a non-supernatural duality theory, according to which two types of matter existed: organic and inorganic. [11]

“Should we speak here of this absurd system, if a system it is, imagined by an impious philosopher, adorned by a great poet with all the richness of his art, a system that libertines of our time would like to revive? This system admits as principles of the universe only eternal atoms, devoid of feelings and intelligence, the fortuitous encounters of which formed all things: an accidental organization generates the soul, which is destroyed as soon as the organization ceases … Never will the formation of any organized body be explained solely by the physical properties of matter; to be convinced of this one need only read the writings of the philosophers who have tried this explanation, from Epicurus to Descartes.”

Students
In 1733, Maupertuis began to tutor Emilie Chatelet in advanced geometry and algebra. [10]

The assumption that conscious beings are comprised of atoms led Maupertuis, often characterized as radical materialist, to conclude that atoms ‘feel’ attraction and repulsion; this view is sometimes compared or contrasted with Goethe and his Elective Affinities. [1]

Venus physics | Chemical evolution
In 1744 he presented the memoir “Agreement on the Different Laws of Nature” (“Accord de différentes lois de la nature”) and published “Dissertation on the White Negro” (“Dissertation sur le négre blanc”), the latter of which becoming the precursor of his 1745 Venus Physics: Dissertation on the Origin of Men and Animals (Vénus physique: Dissertation sur L’Origine des Hommes et des Animavx, published anonymously, which was an enlarged and more fully analyzed argument against the then dominant biological theory of the preformation of the embryo. [4]

Maupertuis argued convincingly that the embryo could not be preformed, either in the egg or in the animalcule (spermatozoon), since hereditary characteristics could be passed down equally through the male or the female parent. He rejected the vitalistic notion that some “essence” from one of the parents could affected the preformed fetus in the other parent, or that maternal impressions could mold the characteristics of the offspring. A strict mechanist, although a believer in the epigenetic view of the origin of the embryo, he looked for some corporeal contribution from each parent as a basis of heredity. [4]

The book was part popular science, part philosophy, and part erotica, in which proposed a theory of generation (i.e. reproduction) in which organic matter possessed a self-organizing (check) “intelligence” that, supposedly, was analogous to the contemporary chemical concept of affinities.

Maupertuis here outlined a materialist version of evolution, supposedly, based on blind random chance (or "blind destiny", as Maupertuis seems to have put it) and the fitness of variations of traits to survive: [3]

“Could one not say that, in the fortuitous combinations of the productions of nature, as there must be some characterized by a certain relation of fitness which are able to subsist, it is not to be wondered at that this fitness is present in all the species that are currently in existence? Chance, one would say, produced an innumerable multitude of individuals; a small number found themselves constructed in such a manner that the parts of the animal were able to satisfy its needs; in another infinitely greater number, there was neither fitness nor order: all of these latter have perished. Animals lacking a mouth could not live; others lacking reproductive organs could not perpetuate themselves. The species we see today are but the smallest part of what blind destiny has produced.”

Supposedly, following either Aristotle and or Galen, Maupertuis, in his Earthly Venus, attributed generation to the mixture of male and female seminal fluids or chemical particles, which combined, he speculated, in a manner resembling the ‘elective affinity’ recently proposed by chemists (possibly Etienne Geoffroy, 1718). [6] Normally, he reasoned, offspring would be a blend of the organic particles (representative of the various parts of the body), e.g. a child having a blend of the skin colors of both parents; sometimes, however, an offspring might receive an extra particle or not enough particles, resulting in mutated or monstrous offspring, such as the albino black child produced from two normal black parents, that he had observed. [7]

This seems to be a very interesting theory; possibly the first "chemical affinity" based theory of sex; pre-dating Goethe; and the precursor to the way in which the haploid number of chromosomes of the gamete (sperm and egg) of the male and female actual do combine, as modern physical science sees things, in terms of free energy determinants. [8]

Kant
German philosopher Arthur Schopenhauer suggests that much of Immanuel Kant’s 1781 Critique of Pure Reason was culled or based on Maupertuis. [2]

Education
Maupertuis was mentored by Johann Bernoulli (see: Euler genealogy) and was a follower of Gottfried Leibniz.

Quotes | On
The following are quotes on Maupertuis:

“The brilliance of much of what he did was undermined by his tendency to leave work unfinished, his failure to realize his own potential: it was the insight of genius that led him to least-action principle, but a lack of intellectual energy or rigor that prevented his giving it the mathematical foundation that Lagrange would provide. ... he reveals remarkable powers of perception in heredity, in understanding the mechanism by which species developed, even in immunology, but no fully elaborated theory. His philosophical work is his most enthralling: bold, exciting, well argued.”