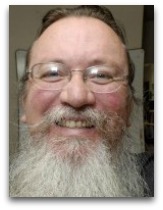 In hmolscience, Pierre Rousseau (c.1950-) is an American philosopher and photographer noted for his 2006 photography philosophically viewing cars on a highway as a constant flow of human molecules.

Overview
In 2006, Rousseau published the following photo entitled “The Constant Flow of Human Molecules” of slowly moving traffic on a highway in Texas, subtitled “in blind service to Kant's Categorical Imperative: 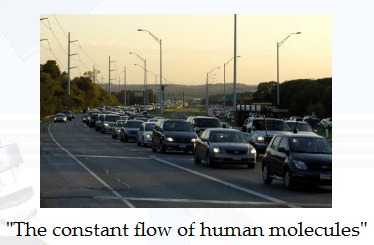 The newest psycho-babble craze is to get happy by perseveration of "good" behaviors, in acceptance of and slavery to the machine.” [1] Much of Rousseau's thinking seems to revolve around an interment of the concept of free will, explication of machine behavior, and self-organization, among other subjects. The following is Rousseau’s views on free will, dynamics, and energy: [2]

“The realization is that the idea of free will is not only wrong and not necessary, but fatal. The full dynamic of the universe is a transfer of energy/information, regardless of whether there are loops of incomplete information stirring up the process, such as genetics (sexual selection) or memetics (reality selection). The idea of free will is a cover-up in a process systemically bent, by way of the institution of incomplete feedback loops of ideas as in memetics, on evolving humanity out of existence.”